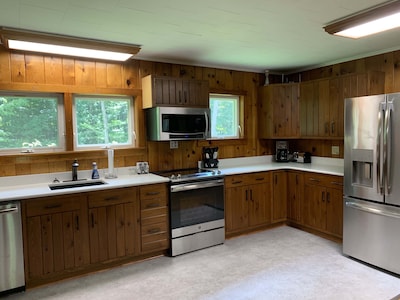 How did we get here? During the winter of 2013, Jake decided to try making his own maple syrup with some of the trees on their 1.5-acre property as a hobby. He researched online, ordered the necessary equipment for a small-scale operation, and got to work. He tapped 50 trees and hung plastic bags to collect the sap. He and Hailee chopped wood and boiled the sap over an open fire at the back of the property. When the season was over, they had made 17 gallons of syrup. Jake, along with help from Hailee and some friends, continued to make maple syrup over the next two seasons, each year upgrading methods and equipment. Instead of using plastic bags that had to be collected and poured into a barrel, they were now connecting all the trees with tubing that used a vacuum to pump the sap to a single collection point. This, in addition to tapping more trees (200 instead of just 50) increased production to 50 gallons a year. Jake and Hailee used the syrup to give away as favors at their wedding in July of 2014 in glass maple leaf bottles. Thoughts of producing maple syrup on a commercial level began to enter their minds, so they started searching for a suitable plot of wooded land. They found what they were looking for in Hartstown, PA. After a successful first season producing commercially, Jake and Hailee had their sights set on expanding. Three more properties, totaling 170-acres, were purchased and set up for the 2017 season. With newly recruited help 15,000 additional taps were put in, making Nova Maple Syrup one of the largest producers in the area.

Jake Leveto purchased this Farmhouse in 2015

Nova Maple Syrup was established in 2015 with the purchase of a 100-acre property in Hartstown, Pennsylvania. The inaugural commercial syrup season began in late January of 2016 with roughly 7,500 taps. Since then we’ve expanded to 22,500 taps covering 275 acres.