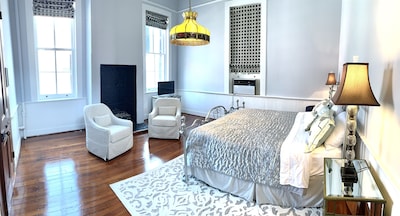 My mother Ruth Bodenheimer ran the Lanaux Mansion as a living museum and popular bed & breakfast for nearly 35 years. After her passing in 2019, my husband Nik and I decided to carry on her legacy by continuing to make this beautiful home available to lovers of music, food, history, and the rollin' bon temps that New Orleans does so well. I'm a New Orleans native, and although I've lived abroad in great cities such as Tokyo and San Francisco, there's nothing quite like coming home to this one. I hope you'll love and enjoy it as much as I do.

You might recognize the stately Lanaux Mansion from "The Curious Case of Benjamin Button," just one of the many films and TV shows in which it’s been featured. The house itself is a star, with a fascinating past. But it’s not just its good looks and pedigree that make the Lanaux so attractive. It’s the unbeatable location at the corner of Chartres Street and Esplanade Avenue — which literally straddles the line between the rollicking French Quarter scene and the famous music clubs and jazz dens of Frenchman Street. Sitting in the courtyard with a julep in your hand, and you’ll hear the blare of trumpets, the drums of a parade, and the whistle of a steamboat rolling down the mighty Mississippi, just blocks away. If you’re lucky, you might even catch a second-line or jazz funeral during your stay here. Built in 1879 by wealthy attorney Charles Andrew Johnson, the house has played host to not only actors and film crews, but to prominent figures of history including southern general Robert E. Lee and others. Some even claim there’s a ghost among its distinguished list of guests. Wallpaper from around the time of the American Civil War still adorns the massive double parlors downstairs, as does much of the home’s original furniture. The vaulted guest-room ceilings soar high overhead. And the decor is a fine mix of classic period architecture and stylish upscale amenities. In 140 years, it has changed owners only four times. Most recently, it was the gregarious and accomplished New Orleanian businesswoman Ruth Bodenheimer who ran the home as a much-loved bed and breakfast for decades until her passing in 2019. Inspired by Ruth’s love for the house and the one-of-a-kind city called New Orleans, her daughter Beth now proudly carries on the legacy of making guests feel welcome and at home here.

What makes this Bed & breakfast unique

Step outside the Lanaux Mansion grounds and go left to hit the bars and restaurants of the French Quarter, or go right to find the myriad music spots on Frenchmen Street. You're about a block from either. Also within a few minutes' stroll are the famous and sprawling French Market, the legendary beignets and cafe au lait of the Cafe du Monde, the beautiful St. Louis Cathedral, and the paddle-wheeled steamboats along the Mississippi waterfront — not to mention more bars, restaurants, museums, curio shops, and art galleries than you could possibly ever visit in one trip. The dream-like settings of Audubon Park and City Park, with their massive moss-covered oaks and glorious historic mansions lining the nearby avenues, are a short drive or bike ride away. Further afield, you have the deep Louisiana bayous full of gators and cajuns alike, plus historic battlefields and plantations to tour. Grab a drink and start planning your trip now. Or come with no plan at all. Either way, having a great time in the Big Easy is, well, easy.