Swafford Valley ... Where Memories Are Made 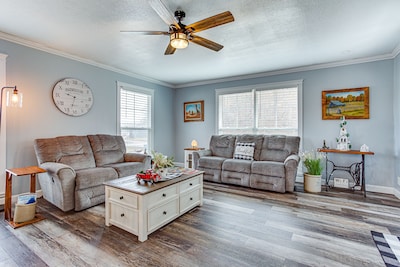 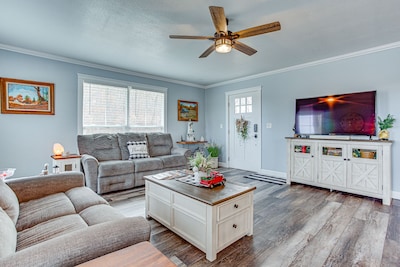 3 bed, 2 bath home in the country with plenty of room to bring the family.

Jill is the Granddaughter of Carl & Karen Swafford. She spent the first 10 years of her life there on The Farm before moving to Flowery Branch, GA in 1989. She currently resides in Jefferson, GA with her husband and three daughters. She is co-owner of the Swafford Valley Creekside Cottage along with her Mother, Carla, and two brothers, Caleb Rumbaugh and Ben Rumbaugh whom also reside in Georgia.. Although the entire family is involved in the operations of the cottage, Jill manages bookings and guests interactions.

Jill Friends purchased this Cottage in 1962

Our Creekside Cottage was built by Carl & Karen Swafford in 1962 on farm land owned by the Swafford family since 1856. The first homestead, an original log house with a stick chimney built by Naason Swafford, was featured on post cards sold in the area and mailed all over the world. This postcard can be seen on the Swafford Valley Creekside Cottage official website. Reason Swafford built a barn and two room home on the farm in 1910 where George Richard Dean Swafford was born in 1913. Although additions, improvements and modern conveniences were added along the way, “Dean” was raised in this home by his father and aunt after his Mother's sudden death in 1919. Dean married Ethel Fern Gulley in 1934. Ethel gave birth in the home to Karen Sue Swafford in 1942, and Richard Kenton Swafford in 1946. Karen married Carl in 1959. They were given land just across the creek to build their home. The two would welcome a daughter, Carla Sue, and a son, Kenton Dean. Carl passed in 2010 and Karen in 2020. Richard and his wife Dixie were married in 1967, and given land on the farm to build their home, where they still work and reside today. They have 3 grown children. Dean died in 2005, in the same home where he was born. Ethel passed in the home in 2008, both surrounded by all their children, grandchildren, and great grandchildren. Dean & Ethel’s grandson, Reason Swafford, recently built a new home on the exact spot of the original stick home, using lumber, milled and cut from the land. Reason and his wife Jacki have 3 daughters and 1 son ... Naason Swafford, named after the original Naason Swafford, who built that old log house 164 years ago. This is The Legacy of Swafford Valley and The Farm. Following in our "Grandaddy Dean & Grandma Dean's" footsteps, we put God first and family second. Our prayer is that by sharing a part of "our" farm, you might be as blessed by it as we have been!

Everyone LOVES our water garden and spectacular country setting!