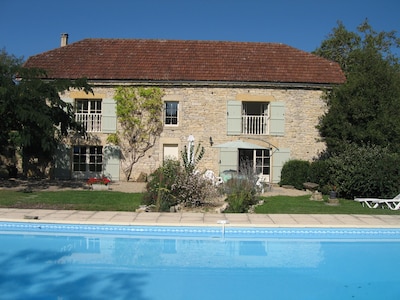 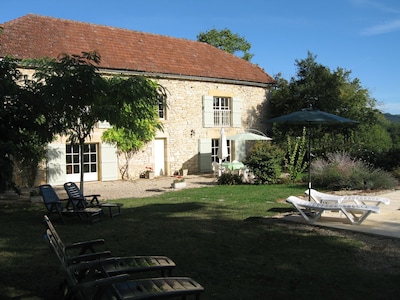 Beautifully restored stone barn with pool, sleeps up to 8 only 5km from Caylus

All bedrooms have wardrobes and chests of drawers providing ample hanging and storage facilities.

As a couple we are best described as 'professional', my husband is a surveyor and I cook. We moved to Norfolk from London in 1980s. Our family are Francophiles having holidayed in France throughout the past 30 years. We have always been interest in areas which have remained French and unaffected by tourism, industry or other development. Tarn et Garonne is one of those areas where agriculture rules but it is steeped in history. We had always toyed with the idea of buying a place but the demands of family type holidays involving teenagers meant that we could never settle on one place. Once they left home, married and started families of their own we decided to 'live the dream' and at the same time create a 'granny trap' for the next generation. This decision is something we have never regretted.

Richard Musgrave purchased this Barn in 2007

We love barns. Having bought a renovated several at home in the UK over the years we came across La Grange through a local contact who knew that an English couple who had bought it originally then as an agricultural building and had converted it over many years were thinking of selling and returning to the UK. Seeing as a project to complete we pounced. We have had work done in the closed seasons such as repointing the stonework, installing heating, extending the pool and restoring the ruined farmhouse as an outbuilding/garage. From May to October we have used La grange either by ourselves or with our friends and family and let it out to others who would appreciate it in a like manner. This has worked most successfully for the last 10 years and we hope that this will continue for many years to come.

La Grange forms part of a small hamlet having been the original farm building complex. There are 3 cottages and the original farmhouse all situated to the North of La Grange. None overlook the property and apart from the farmhouse none are occupied other than by owners (2 Belgian, 1 English) as holiday homes. The location is most quiet and rural without being isolated. Having been a barn the building has a open plan ground floor which makes its use flexible. This seems to suit families whose members want the space to do separate activities but not on their own. Supervision is possible from any part of the ground floor! The house and garden are located in a rural position surrounded by woods, farmland and on the edge of the Ruisseau Valley with views across to the village of Parisot. No view is spoilt and the feeling of being in the countryside is complete. Apart from the wildlife there is no sound. Whether on foot or by bicycle there are many miles of track and lane to discover from the house. Many circular routes are marked on the maps in the house.