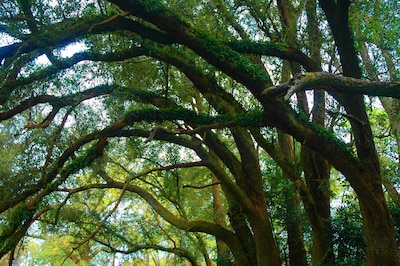 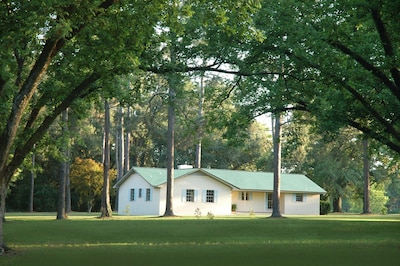 5 mins. to Bainbridge Boat Basin- 15 to Lake Seminole/Hunting- 40 to Tallahassee

Frank Aultman, Proprietor - Frank was born and raised on Ten Horse Farm. Frank's ancestors bought the property in 1912. Frank has been restoring the old farm and The Guest House for several years.

The Guest House is situated just off the main driveway to the turn of the century Planter's House of Ten Horse Plantation which now farms timber and pecans with beautiful pastoral views of fields, meadows and orchards. The remainder of the property is a wild life conservation area. It is very private, peaceful and quiet. It is convenient to the town of Bainbridge (a mile from the city limit) yet feels away-from-it-all. The location is extremely convenient to the Boat Basin on the Flint River for fisherman (5 minutes away) and also a short distance to Lake Seminole. The Capital City of Tallahassee is a 45 minute drive and the beaches of the Gulf Coast is only a 1-1/2 hour drive.

Located in Georgia’s historic “Plantation Trace” region, Ten Horse Plantation was once one of the largest working plantations in the area during the last half of the 19th century. The community at Ten Horse Plantation consisted of the owner’s family, tenant farmers and sharecroppers who prospered by living and working together after the devastating close of the Civil War. The community raised and grew everything they needed. The only thing they bought was salt for seasoning and curing. Unlike Southern Anti-bellum Architecture depicted in movies like 'Gone With The Wind,' Ten Horse Plantation's Planter's House represents a more typical plantation style. Plantation owners and their families (including the owner's children) worked side-by-side with tenant farmers and sharecroppers. Ten Horse Plantation is noteworthy in that it was among the first to have gravity-fed running water from a water tower to the houses, barns and animal troughs. It was among the first to plant pecan orchards and planted pines. The Planter's House was one of the first in the community to be built with a Delco Plant providing electricity to a light bulb which hung from the ceiling in every room. The 2nd generation owner was instrumental in bringing electricity to this part of the country and was among the first presidents of the regions Rural Electric Company. At Ten Horse Plantation, there was a wash house, smoke house, chicken house, mule barn, corn crib, hay barns and several tenant houses on the property. Crops grown consisted of cotton, corn, tobacco, cane, soybeans, peanuts, pecans and timber. Animals raised included cattle, hogs and chickens. Products produced included milk, butter, seed, sugarcane, turpentine and hay. From the beginning, Ten Horse Plantation was in the forefront of modern agricultural practices, and invented more than a few.