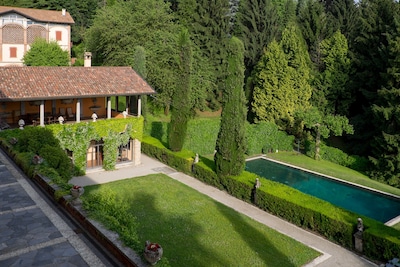 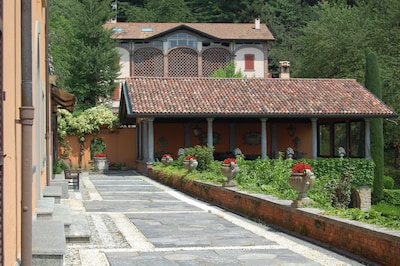 I grew up in Kansas and met Luigi when the bank I worked for transferred me to Milan. The home has been in Luigi's family for generations. We used it a lot when our children were young but now that they are living abroad we are pleased that others might share and enjoy this beautiful place. I love to cook and both Luigi and I enjoy sharing meals with friends, so when we decided to refurbish the kitchen, we joined 3 smaller spaces into one large gourmet kitchen and informal dining space, with plenty of space for sous-chefs and conversation groups, and all the utensils needed to facilitate a great meal. Over the years the house has been used for innumerable family gatherings, musical evenings, holiday parties, charity tea parties and family weddings. We love having the opportunity to share the beauty of Poggio Verde with our three children, all of our extended families and with friends.

With a deed dated November 1897, our great uncle Carlo Bondonio became the owner of Poggio Verde 'Green Hill', an 8-hectare property consisting of a farmhouse, a house with a barn, and a country house. The date of construction of the country house is uncertain but parts of the old farmhouse likely date from the 1500s. Photos from the early 1900s show that Poggio Verde was similar to its current appearance, but surrounded by oak forests and with a few cultivated fields. At the beginning of 1900, uncle Carlo built two farmsteads for dairy cows and pigs. Milk and butter were produced under the Bondonio brand as well as silk cocoons and wine. Uncle Carlo also installed two cannons. They fired when there was risk of hail and neighboring counties replied with the sound of bells. Any narrow escape was celebrated with copious libations. When uncle Carlo died in 1936 his daughter Fanny inherited Poggio Verde. She used to spend summers here where her husband, Gabriele Santini, director of the Opera of Rome, prepared his concerts playing the 1905 Schiedmeier piano still in our living room. Many artists visited Poggio Verde, including Arturo Toscanini. But with the outbreak of the war, Fanny took the decision to sell. Poggio Verde was then purchased in 1941 by her cousin and our grandfather Luigi, who had spent wonderful periods of his childhood in Poggio Verde. When the World War II bombing began, the family moved to Poggio Verde. Here domestic life was quiet; farmers cultivated the land, kept cows, chickens, turkeys, geese, silkworms and made wine in the Tinera. With the end of the war began the great transformation of Poggio Verde. A garden, a stone porch and an Italian garden were built. In the porch, grandfather Luigi, a passionate Latin scholar, had two stone plaques placed with quotes from Horace’s Satires. Like Horace, grandfather Luigi saw in Poggio Verde the fulfillment of his dreams and the hope of a peaceful old age among his affectionate family, friends and books.

Less than an hour from Milan yet immersed on a quiet green hill, this 18th c. villa gives visitors the pleasure of enjoying all the riches of the northern Italian countryside and cuisine, including a Michelin starred restaurant and several micro farm producers in the neighbourhood, with a kitchen that just invites experimentation and a stunning outdoor dining space, while at the same time giving easy access to the myriad of cultural riches of Milan and the cities of Bergamo, Lecco and Como, just to name a few. Biking along the Adda river in a charming state park is just 30 minutes away, the same distance as one of Italy's top golf courses where the Italian Open will be held in 2015. Mountain climbers need drive only 40 minutes to reach the Italian Alps, and a luxury Spa treatment is merely 10 minutes away. Monza's royal treasure, including the iron crown with which Napoleone famously crowned himself, is right in our neighbourhood. And of course, you can simply stay home and enjoy our lovely park, challenge fellow travellers to croquet or badminton or enjoy a book in the cozy Roccolo surrounded by trees. Indoors there is an excellent grand piano that was played by Toscanini, a Bose large-screen home cinema and several quiet spots to take a book. The house features air conditioning, high-speed internet throughout and an elevator.