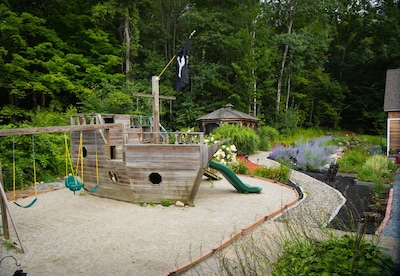 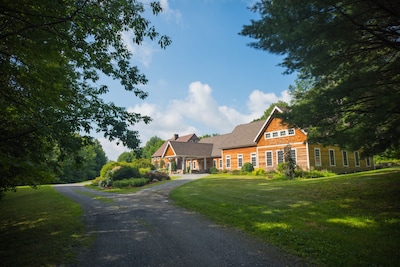 Secluded Luxury In The Country, Close To Culture

twin/ single (2)
Brigadoon is attached to the handicapped bathroom.

Guests are welcome to convert twins into kings in Merry Widow and Brigadoon. We do ask the beds to be restored prior to departure. There are multiple shoji screens at your disposal for additional privacy. Carousel also features pop up tents on the twin beds for privacy.

Jenny and John met in 1991 while performing in Jesus Christ Superstar in Germany. John was in the pit playing his trombone and Jenny was onstage kicking her legs while making eyes at the pit. Jenny began stage managing in the mid-90s while John continued to play his horn in any number of bands, ensembles, records, and films. They both worked on Broadway for a number of years before deciding it was time to live in the country. (During that time, they managed to get married.) In 2006, they made a quick and sudden decision to sell their home in Astoria, Queens and see what Vermont living was all about. They never looked back. After Robert and Karin (Jenny’s parents) passed away, Jenny’s father entrusted her to continue his legacy of hosting people from far and wide in his home. Robert and Karin originally built the house in 1994 as a weekend retreat. They so loved it here that they sold their apartment in New York City, moved up here full time, and then built a massive addition in 2010. Karin was wheelchair bound, so the house was designed for her accessibility. Ramps, a handicapped shower, and no multi-leveling on the first floor make it easy to get around via wheelchair. In New York, any number of people had keys to their home. It was always full of various guests, rehearsing a musical/operetta, giving a concert, or just hanging out because they had nowhere else to go for Thanksgiving. The addition to Karin’s Place was built in the same vein. Build it and they will come… The bedrooms are named after light operas that Karin and Robert appeared in together during their lives. They were active in the Village Light Opera Group the entire 30 years they lived in New York City. Their first date was a trip to the opera! Sadly, both Robert and Karin passed away earlier than they should have. Jenny and John promised that they would continue to keep the house full and busy. Thus, Karin’s Place was born and Jenny and John have been enjoying a variety of guests ever since.

Jenny Dewar purchased this Estate in 2015

This property was passed on to Jenny by her parents so that she would save it and keep it full of people.

The beauty of this home is the feeling of being in the middle of nowhere but having arts, culture, and towns just a few miles away. There are unexpected treasures everywhere you turn. It is a home. A grand home, but a home. Everyone is comfortable and all you need to bring is food and your bodies!