Casa del Pastor is a secluded adobe cabin built in the territorial style. 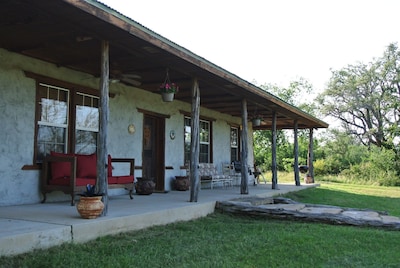 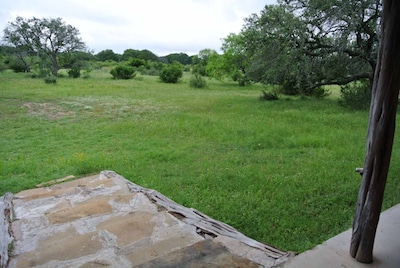 We are educators and lived in Lubbock for 33 years before retiring on the family ranch. Rebecca was a high school English teacher, and Carlton was a professor at Texas Tech with a specialty in range management. We were both raised on sheep ranches, and sheep continue to be one of our favorite avocations.

Our adobe cabin is nestled into the north pasture of a family ranch that was settled by Rebecca's great grandfather, William Mark Wittenburg, in 1879. William sailed to the Germany in 1854 with nothing but the clothes on his back and a shepherd's license. He eventually settled in Lampasas County and is credited with being among the first to bring fine wool sheep to Texas. The property and tradition of raising sheep was passed down to his children, grandchildren, and now great grandchildren. This ranch and its line of sheep have been held in the Wittenburg family since 1879. We started building Casa del Pastor in 2002 with the help of friends and the Olivarez family of Lampasas, and it took about nine years to complete.

Growing up in New Mexico, Carlton lived in an adobe and was very much influenced by adobe architecture, so he wanted to bring a little taste of New Mexico to our Texas ranch. Casa del Pastor, built and decorated in Territorial New Mexico style, is constructed completely of adobe bricks; door and window casings are made of three inch timbers. An eight foot porch encircles the entire adobe, providing ample space to relax and enjoy nature's beauty. Inside. guests will find a complete kitchen, laundry room and a spacious living room, bedroom, and bathroom. The claw-foot bathtub (with retro-fitted shower) is a family heirloom, and the old bathroom sink is from a West Texas ranch.