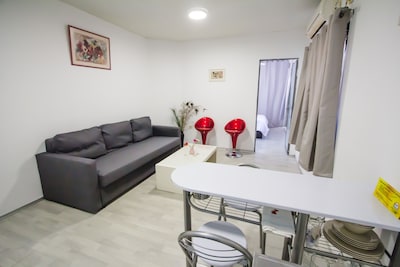 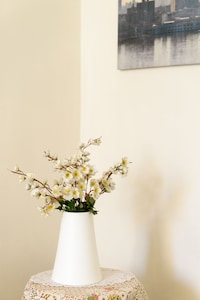 As the start we ordered apartment with one doble bed and foldable and one more bed. We come to street nr.20, but they say that that apartment is in 68, because in our, other people live. Said that the new one is better. There was no redy apartment for us. There was in clothet things for one person, 2 towels, 1 bed cover etc. But then they give us, more towels, 4 towels for 4 people, no kitchen toilet, bring as toilet paper, then we asked, where is the free toileteries-there was no toileteries, when asket , bring us hand soap for kitchen and bathroom-only one bottle for both. Then broked shower, after 1day, put in bag the head of shower and put near doors, husband changed it. So we paid for cleaning (there was writen-one per time)- but no one said that it will be on end(after we leave). So we needed toileteries to bay all it on place what is not cheap.

The best thing is location. Room walls are not clean, the furniture is old. There are no cleaning liquids for floor.

When we asked the garbage bugs, because we use the only one, they give us shopping plastic bu

The TV not worked, when we arrive, but thay make it. There was a fealing that we paid not early but found them and askem for some grace to let them to stay here. When I asked where are the beds, toileteries, and other things that was written in Hottel.com. Thay said that I am fooling him out. When I said, that I can show what was in reservation he don’t wanted to look, and said that it could not be, as I’m lying.

This would be a good short-term rental/AIRBNB place, but it wasn't a hotel. The entrance was a bit off putting but the room itself, a one bedroom apartment, was fine. It was clean and quiet with everything I needed to prepare meals. The owners were easy to contact. However, it isn't a hotel. There is no on-site staff; no daily cleaning, etc.

OK apartments not far from beach

First, the apartments looks nothing like the picture. Picture should match apartment. It is an older apartment. Apartment was clean. Host sent a friend to let us in. Both host and friend were always friendly and professional. We paid the cleaning fee as it was listed. We were surprised to learn there was an electricity charge. The host did not charge us the electricity fee because it was not stated in the listing. It would have been ILS 128 (USD 33.68); but he said it was a present. It wasn't bad for the price we paid. Shower had good pressure. Bathroom door was flimsy. A/C worked very well. Kitchen had microwave and cooking utensils as well as dishes. Refrigerator worked well. Had TV with cable/dish. Good Wi-Fi most of the time. Down side was there were a few bugs; but that could happen anywhere.