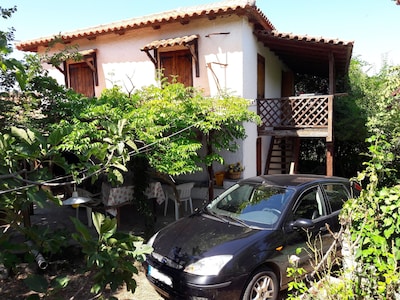 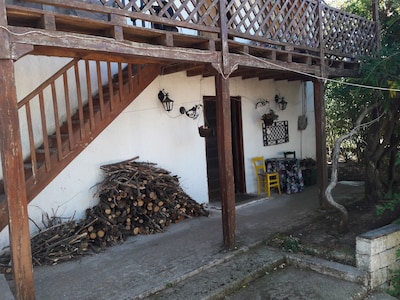 My name is Yannis and this is our family house. I grew up mainly in Athens but also moved around Greece due to father occupation. Studied Engineering in England and now living and working in the North East outskirts of Athens. What makes me happy is when I hear my guests saying that they felt so much at home, that they actually never left the house during their stay ! Many thanks, Yannis

The cottage was a family house, initially built in the 30s and renovated in the 90s, as a vacation home. Back in the time, the ground floor was used to keep the animals and after the family moved in, it was used as storage area for goods. The upper floor was used for eating and sleeping. For this reason, the fireplace was always on the upper floor, to maintain heating and for cooking purposes. The house and neighborhood are full of Greek tradition and represent how people are still living in these unspoilt areas of Greece.

The village is built between 2 magnificent little gorges with running waters full of chestnut and walnut trees, plane trees, oaks, strawberry trees and many more. The cottage is situated next to the edge of one of the 2 gorges, named Avra, and it is one of the most interesting trekking/hiking routes in the area. Also, 15mins drive from the house, lies one of the biggest and most impressive Oak tree forests in Greece, which according to the Greek Mythology was one of the places were the Centaurs were leaving. It is worth a visit. Last but not least, one the least known small waterfalls in Greece, is located 20mins drive from Doukas (just check the photos). A trek is organised by a team of enthusiastic local young people which are very fond of their little discovery. As you can imagine, all these treks/routes are followed by tasting typical Greek and local delicacies in traditional Greek taverns. There are more places to visit in the area that cannot all be mentioned here. Please ask us for more suggestions and directions prior or during your stay. Finally, our "next door" neighbor will be able to provide fresh daily eggs, milk, local olive oil, honey tasting and smelling local herbs and flowers and depending on the period of the year (October timeframe) fresh chestnuts and walnuts!