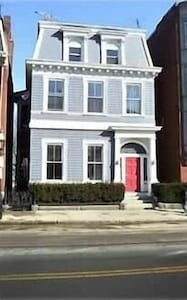 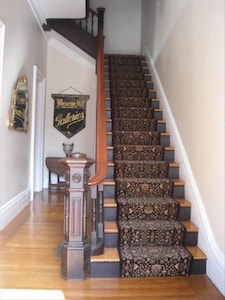 Ask a question
Member Since 2005
Donna & Max Rans, Owners-occupied is a Premier Host·They consistently provide great experiences for their guests

Married with 3 children ages 24, 22 & 18, we moved here in 2001 from Redondo Bch, Southern California. Donna is originally from the Boston area, but moved to LA for work after graduate school where she met and fell in love with Max - a native Southern Californian she married in 1994. Seven years later, Donna convinced Max to move back to her Boston roots - and by the snowiest winter of 2015 they weren't sure why! But seriously, Boston has been a great family urban setting to raise our children - we love the city and the exciting life it offers!

Even with 5 of us, this large house with 4 floors was always more space than we needed. The top floor was originally built with separate access and often operated as an autonomous level, so we continued renting it as such when we moved in. Since we have often traveled via VRBO/Homeaway, we thought it would be great to similarly offer short-term rentals instead of the traditional month-to-month leasing. We've always had much success renting our top floor through VRBO, and have met so many wonderful people from around the world. It's truly a labor of love!

Our longevity! We were only the 7th property listed on Boston's VRBO website in 2004, long before it became popular - and LONG before Air B&B. In light of increased immense competition, we remain one of the busier properties with many cherished "regulars" - and we're one of the few with such longevity that has all 5-star reviews. Hopefully we're doing something right:)