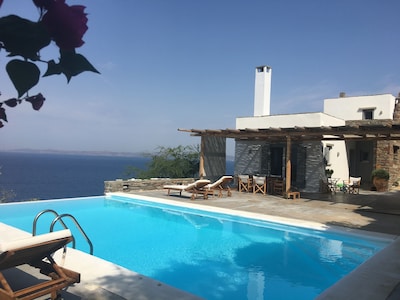 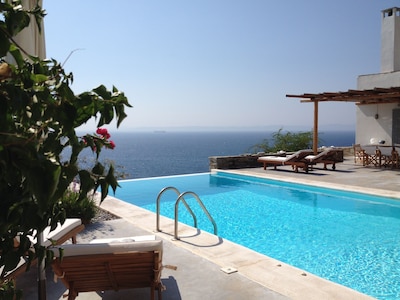 House with character and splendid sunset view over the Aegean sea

queen
Includes a T.V. and a small refrigerator.

Bedrooms 1, 4 and 5 have their own separate bathrooms. Bedrooms 2 and 3 share a bathroom.

I was born in Athens. When I finished high-shool I went to England for my degree and stayed there for six years. Since then I live and work in Athens and I loved to travel a lot to get to know my country and other countries as well.

Katerina purchased this House in 2007

I first went to Kea in 1996 to a friend's newly built house and that is how I got to know the island, which made me love it. Although I had travelled a lot through the Greek islands this was the one that made me think that I would like to have a house here! The beaches the nature the people the architecture of Ioulis and the way the villages - settlements are, plus that in only two hours from my home in Athens I could be away in Kea, made me thing seriously of having something there. Kea is a island that offers you a cosmopolitan touch if one wants it, for example in Vourkary, but at the same time one has the opportunity to have peaceful and relaxing vocations. The west side of Kea at the area of Kalogiros -Vroskopos is a 20min. drive from Korissia port. it is a place which has 10 houses built in a distance between them which gives a lot of privacy and at the same time it has breathtaking sunsets overlooking the Aegean sea. All the above made decide to choose the specific area to built my house and I am very pleased with my decision!

I chose a plot of land to built my house having in mind that I only want to have the view of the sea in front of me. The architectural design is simple and gives one privacy although the house can be full of people.The best however that makes it special is the magnificent view that one may see from wherever he stands in the house,the sea the sailing boats, the sunset and in the evening the moonlight that falls in the sea.