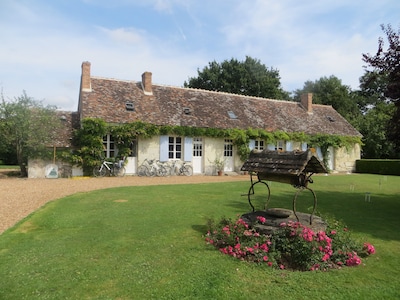 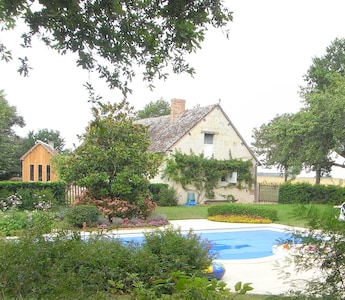 Suit parents with kids in Bed 2 the twin room

Suit grandparents or other friends

Two beds could suit children next to Bed 1

Could suit children with parents downstairs

Could suit parents, bathroom next door, with kids upstairs.

See floor plan photo. Beds 1 & 2 upstairs at west end might suit one family with another family in Beds 3 & 4 at east end. Bed 5 ensuite for grandparents or other friends?

Ask a question
Member Since 2017
Nigel Campbell is a Premier Host·The owner or manager of this property consistently provides great experiences for their guests.

Freydis and I have lived in the Highlands of Scotland for the last 14 years. Our affection for this part of France dates back to 1979. We were lucky enough to live near Prunay for two years while Nigel worked as director for a small company in Tours. Our two boys, then aged 4 and 6, went to the local school and soon became fluent in French which has held them in good stead ever since. Before returning to the UK we spotted this farmhouse for sale and became the proud owners in 1982. Over the subsequent summers we dedicated our holidays to La Chapelle, and had great fun converting it into a comfortable holiday house. The swimming pool, gardens, orchard and little wood were added during the intervening years. More recently we added the tennis court and the kitchen was new in 2014.

Nigel Campbell purchased this farmhouse in 1980

When I worked in Tours in 1978 we lived in this area. After two years I returned to the UK but we bought and converted this farmhouse as a place for holidays. We have been coming here ever since so we know the area very well and have many local friends. Every few years we make additions. First a pool, then conversion of the barn, then bicycles and now a tennis court. Our children and grandchildren have been coming here for 30 years. Although new to Homeaway we have many years of experience of renting La Chapelle.

What makes this farmhouse unique