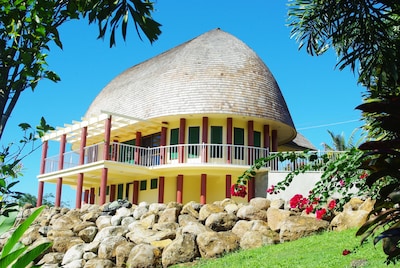 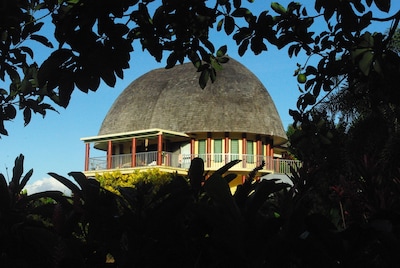 Spectacular traditional FALE hidden in the Highlands above Apia

Master bedroom, spacious and private, with luxurious ensuite with bath, is semi-circular in shape with plentiful full length louvers for wonderful breeze. Features tiled floors, ceiling fan and antique hardwood furniture. Downstairs features 2 single bedrooms with their own entrances. They are also bright with the floor the ceiling windows (mesh enclosed) and ceiling fans. The Loft is above the master bedroom accessed by stairs from the open living area of the fale. Wonderful exposure to the intricacy of the traditional Samoan decoration and roof design. 2 or 3 single beds. Ceiling fan. Open atmosphere. All linen is provided.

Tim and Maria Walkden-Brown are now seeing their vision of providing a place for travelers to appreciate serenity and quietness in a beautiful and uncomplicated hideaway come true. Why, because that is what we ourselves seek…. how much more for us to be share it with like-minded soles….. the Samoan Highland Hideaway. Our quest seeded in the early 1970’s when Tim arrived in Samoa from Australia on his way to Canada. He met his wife Maria and now 38 years later after sojourns in and between Samoa, Canada, Australia and New Zealand we are entering into our dream. No wonder the iconic writer Robert Louis Stevenson had a similar dream. Our family is settled in Australia and Canada and sometimes Bosnia but they all adore the purity of the beauty, culture and simplicity of Samoa. So can you. Tim has spent a lifetime in heavy engineering in many remote locations from the Canadian Arctic to the windswept Sub-Antarctic. Maria’s time away from Samoa saw her putting her heart into what she loves; serving people. She had the ongoing privilege of working alongside people from Africa and Asia while meeting premiers and Canadian hockey stars. Above all she loves her garden so where better than Samoa. As you can see we are a multicultural family, love meeting like-minded folk from all countries. We built our present house in this beautiful and quietly remote highland region of Aleisa on the cross island road to Paradise Beach in the early 2000’s. Since then the grounds have developed and much of our sustenance matured. We completed building a traditional Samoan fale adjacent to the main house in 2010. We can’t wait to share this with our guests.

We originally chose this remote and wild piece of land because it was distant for everyday Samoa. It has transformed to what you see today. We developed the land for our retirement home and then it took on the expansion into our present vacation property.