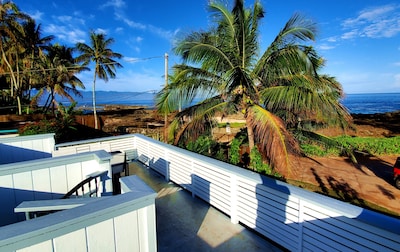 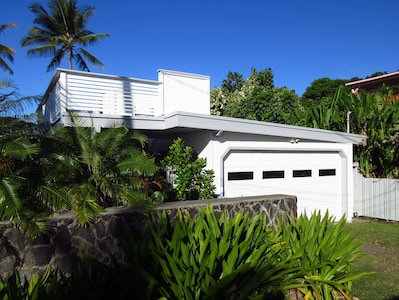 Aloha friends. Thanks for having a look and I think you'll really like the North Shore. I thought the beach where I grew up in San Clemente California was the best ever – that is until I came here. Now Monica and I make 2-3 trips per year. A typical day would be to walk to get coffee, walk by Shark’s Cove; check snorkeling; walk, jog, or ride up the bike path; chores – lot’s of home maintenance when you’re by the ocean; go to the beach – biggest decision – which beach; relax at home; have a cocktail on the lanai and watch the sunset. Mahalo.

Nicholas Maddocks purchased this House in 2005

The reason we bought a home in Hawaii is largely attributed to my cousin who moved here when he became director of protected species for NOAA, and led conservation efforts for the Monk Seal and the Honu. All those years he was telling me about the magic of the North Shore. Then his son married a Hawaiian, and they hosted a week's worth of festivities on the North Shore from Waimea Bay to Sunset Beach. After experiencing the beaches, beauty, and Aloha Spirit firsthand, I was hooked. Soon this home came available and my cousin went there and became my eyes and ears as we talked on the phone. After an hour of detailed communications, I made an offer and bought the house virtually sight unseen! It turned out to be the best move I've ever made and family, friends, and guests have been enjoying it ever since.

The best things about the property are the setting (quiet - set back off the highway); view of Shark’s Cove and Pupukea Marine Sanctuary; and perfect location – you can go to Shark’s Cove for snorkeling, walk to several beaches, or walk to Starbucks for coffee!