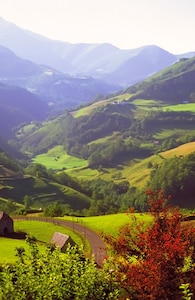 Style, comfort and understated luxury in the heart of the French Pyrenees

“My favorite thing about our house and land is that the village of Salles has a particularly rich natural heritage, thanks to an environment that has remained very well preserved ... a small "sanctuary", a precious place which has preserved its authentic pastoral character, offering to the true lovers of nature all the pleasures offered by a space still wild, where the man has found his place in harmony with the landscape: random paths through which to discover the many barns that adorn this landscape and further accent the charm of the place and where everyone can take in the scenery, smells and warmth of this beautiful space. I have had the house since 2007 and am fortunate to have forged extremely strong relationship with the families of mountain guides and local residents. I am very passionate about the produce of the Valley and the natural way in which man and beast co-exist together and the absolutely joy of walking five minutes out my front door to be able to forage in the forest for Cepes (Porcini), Girolles and other mushrooms and wild berries.

The construction of this house is estimated to be in the 18th Century, and unlike many other mansion houses or chateaux there is no date on the keystone and after a great deal of research Robynne discovered the history has been forever lost during the war. The mansion house for its part was linked to an economic function, with farm buildings and agricultural craft differentiating the mansion to that of a bourgeois pleasure mansion. This property was locked in the middle of its production buildings with a small garden but with original substantial land adjoining the property within a small village. It was probably inhabited by notables or nobility, people of the bourgeoisie, perhaps a wealthy landowner or business leader, as it is notably in the heart of the village situated next to the very small Chateau du Arzaas and overlooked its lands stretching to the valley below. As is the history of the house important, so too is the richness of the history of the village. From the 12th century the village of Salles was located within the Noble Fiefdom of Arzaas and was the most important of the 10 villages in the Valley. During this time each village was linked by the small paths, still in existence today, suitable only for walking and it was this foot traffic that led to the importance and name of the village. In the 14th century a new path constructed suitable for carts to Argeles Gazost where the farmers market had stood since the 12th century and consequently the well used paths in the Valley of Bergons were bypassed through Argeles. These paths to Salles became less used and more neglected in favour of the cart path through Argeles-Gazost which in time became the principle village in the valley. However as Salles was still the seat of the Nobles of Arzaas, their chateau and lands situated in the heart of the village, Salles still remained the second most important village in the Valley.

The French Pyrenees are a mountain range unlike any other. Situated along the French-Spanish border, these mountains have a distinct medieval history. Although they are less famous than their eastern sisters the Alps, their relative obscurity gives the Pyrenees a distinct peace. In so many ways the Pyrenees are a truly individual mountain range – and in mountains unlike any other there are adventures unlike any other! To really appreciate the real Pyrenees, you need to get off the beaten track, the back-country trails, where accommodation is in tiny mountain villages like Salles, and the only sound comes from the tinkle of cowbells and the occasional thunder of melting snow tumbling from a distant ridge. Set in the Valley of Bergons, the village of Salles has a particularly rich natural heritage, thanks to an environment that has remained very well preserved. It is a small sanctuary and a precious place that has preserved its authentic pastoral character, offering to the true lovers of nature all the pleasures of a space still wild, where man has found his place in harmony with the landscape. Random paths, for which still hold its historic significance are still in existence through which to discover the many barns that adorn this landscape and further accent the charm of the place and where everyone can take in the scenery, smells and warmth of this beautiful space.