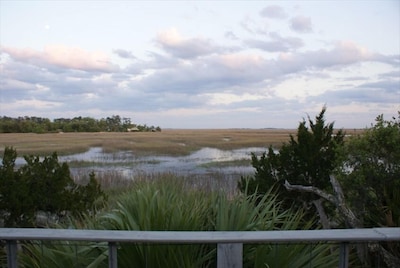 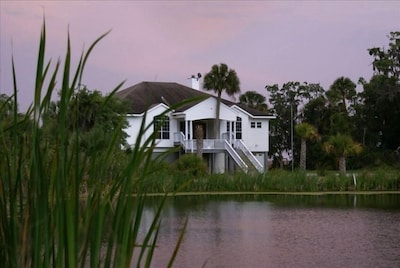 Susan until 09/09 was director of Canopy Studio, an aerial arts teaching and performing center in Athens, GA. Don built Canopy Studio and did the rigging and technical work there. He now makes carbon fiber dance trapezes and sells them all over the world. Susan still teaches some workshops and master classes around the country, but mostly she teaches occasional workshop/retreats to aerialists that come from around the country to the aerial dance studio that Don built next to Marshbreeze (which opended April, '13). They met in New York City (where Susan taught and performed and Don was a commercial photographer) before moving to the SF bay area for 9 years, then to Athens for 10 years. Now they are full time in Darien.

Don Carson purchased this House in 2006

We decided that we love the marsh more than the beaches. There is so much wildlife just off our deck. It never gets dull. One minute it is tranquil with a golden glow sunset. Then, other times we are treated with a symphony of thunder and lightning. We like the proximity to Savannah as well as the civilized Jacksonville airport.