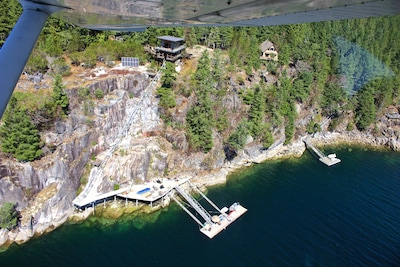 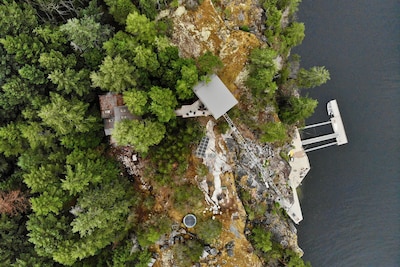 West Coast Version of the Caribbean. An ideal STAYCATION for BC Residents!

Ask a question
Member Since 2019
J. Alistair Palmer is a Premier Host·They consistently provide great experiences for their guests

J. Alistair Palmer, owner/operator Alistair was born in the mid-fifties in Glasgow, Scotland but immigrated to British Columbia, Canada with his family at an early age. After living in the coastal town of Powell River, (also on the Sunshine Coast), his family moved to Vancouver where he graduated from high school. He got his Bachelor of Arts in English and Creative Writing from the University of Victoria. Upon graduation, Alistair started a company that promoted arts and entertainment in Victoria and eventually moved back to Vancouver to do the same. With other partners, they formed the Institute of Communication Arts with the other business being graphic design and print promotion services to a multitude of clients. Alistair produced two tour programs each for rock stars Loverboy and Bryan Adams and was the publisher of the Expo ’86 – World Festival Magazines. With semi-retirement, Alistair started spending more time at Quarry Bay. In 2004, he embarked on a decade plus journey to build the ultimate retreat. It all started with a major blast of the cliff front. That and the ensuing scaling work prepared the way for the funicular elevator, cliff-side wharf patio, ramp and floating docks. Then came the elevator building and Perch studio; a bridge to link it to the original Tree House cabin; then it' major renovation and expansion. Alistair has been bringing his two sons to Quarry Bay since the oldest was six weeks old! Now in their mid-twenties and graduated from University, they return on long weekends with friends during the summer months. Alistair embarked on writing a collection of stories about his parental journey with his sons entitled – “Confessions of a Weekend Dad”. The first book, (of a planned trilogy collection), is available for purchase on Amazon. The second book is finished but awaiting release. The third is in the works. There are many stories that originate and take place at Quarry Bay. Check it out on Amazon or google Weekend Dad.

Why the Quarrybbean? The name originated from Alistair’s imagination. After vacationing in the Caribbean, he felt that the vibe was similar to that of Quarry Bay during the summer… different landscape and weather conditions but the feeling of the warm ocean breeze and seaside freedom, open sky and visibility, and lack of man-made structures. Another thing that has been mentioned by friends is a throwback to the 60’s when Vancouver had events like the famous Stanley Park “Be in” gatherings… sounds like ‘bbean’ hence the ‘Quarry be in’ assimilation. In 2003, Alistair was tasked with creating the theme and organizing the strata’s annual community Quarry Harbour Sea Festival. He came up with “Pirates of the Quarrybbean”. People dressed as pirates and he launched a major treasure hunt with a treasure chest full of booty. The Quarrybbean name manifested itself with his ultimate desire to create a retreat for those wishing to return to nature and for getting in touch with their inner self, friends, family or partner. After thirty years of enjoying and creating a living environment that takes advantage of the water, sun, wind, shade and tides, maintenance to keep everything running smoothly, it's becoming more costly. We now have to pay others to do what we used to do but we are determined to share this special experience and unique setting. We want to cultivate repeat guests into the future. You may want to include more friends another time. If so, we are teaming up with a near neighbor who can accommodate up to 3 couples but not until 2021). Add to your tribe! If you have teenage children, this will be their oyster. Dare to put away your phones! Getting back to nature is the best medicine & remedy for a cluttered mind and misplaced values. The natives have it right when they talk about the 'spirit of the land'. Its called 'mother earth' and 'mother nature' for a reason. Get back to life! Start your return journey at the Quarrybbean!

What makes this Resort unique

Quarry Bay's shoreline is owned by various individual strata lot owners with some never used public access parkland. Lots have become coveted family legacy properties. Most of the bay is protected from the prevailing south-westerly winds. Access to the island is by boat or floatplane. There is no hydropower, roads or public services. Water taxi service is available, or dare take a floatplane with stunning aerial views of the coastline, all the way from downtown Vancouver, YVR, or even Seattle! You will be renting a private retreat residence that has had the same owner for over 30 years. Alistair Palmer has continually expanded and upgraded the buildings, docks, and services. This is an off-the-grid accommodation. We generate renewable energy every day from a solar system that powers the elevator, water pump, pressure tanks, fridge, dryer, washing machine, dishwasher (restricted use), all lighting and power outlets. We have four flush toilets that effectively use a septic field. Recreational activities, serenity, bonding, creativity, and nature are the primary reasons to come here. There is much natural and rugged beauty within eyesight of the cabin. Explore our backwoods by trail. If you are a birder, writer, photographer, yoga practitioner, meditator, painter, star-gazer, windsurfer, paddle boarder, hiker, snorkeler, scuba diver, kayaker, cliff jumper, into fishing, mountain biking, swimming or even beachcombing, you will be in your element at Quarry Bay. This is a special retreat for those wishing to take a break from city dwelling, the fast-paced digital world, or to reconnect with their inner self, their partner, family, and friends. It’s a chill zone with nature zen-like vibes. Enquire and request our comprehensive 'Overview and Orientation' document for additional information, recommendations for planning and rental packages, conditions, change over days, etc.