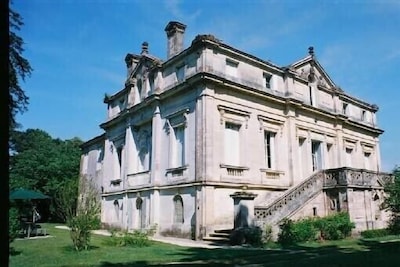 This beautiful property is located in the south of the town, at the edge of an arm of the Jalle, called "Jalle de Buceguette" near the place called Cantinolle.

The name of Bussaguet would be a diminutive of the name of Bussac. The Chevalier Guillaume de Bussac owned in 1242 a mill "le molendini de Bussaguet". At the time, he had disagreements with the monks of Sainte Croix Abbey in Bordeaux over the dime, for which he was indebted.

In the 16th century, Bussaguet was the most important Lordship in the parish of Saint-Hilaire du Taillan and belonged to Raymond Eyquem, sieur de Bussaguet. Humanist Michel de Montaigne's uncle, he is a landowner and Advisor to the Bordeaux Parliament like all the members of this famous and influential family from the Bordeaux region. The Domaine de Bussaguet extended over the municipalities of Taillan to Parempuyre via Eysines, Saint Médard en Jalles, and Blanquefort.

The De Cursol family later owned it. At that time, around 1780, a large reception house built on the plans of the architect Louis: the current Bussaguet was annexed to the castle.

The old castle was partially demolished in 1935. Currently only the stables and the disused chapel remain, a stained glass window adorns the Saint Hilaire du Taillan church.

In 1812 the estate belonged to a former police chief Pierre Pierre who died in Bordeaux in 1822. Without descendants, the succession returns to his mother Marie-Thérèse Falgue, widow of Sieur Antoine Pierre.

His granddaughter Catherine Petit Delfau, widow of Joseph Lapène, became its owner in 1842.

Two mills, Moulinat and Bussaguet, depend on the estate in 1844. Being in the perimeter called "sources", they are purchased by the City of Bordeaux during the construction of the aqueduct supplying Bordeaux with drinking water.

Madame Lapène died in 1902. The estate then becomes the property of Madame Elise Beer of Paris.

Mr. Maurice Kloz, the ancestor of the current owners, bought it from him in 1909.

About 3 Kms from SUPER U Shopping Center, TOTAL station on the left.

At 200 meters, PASS 2 BRIDGES on the “Jalle de Buceguette” river

before the indication of the city "LE TAILLAN MÉDOC"

Bus to the Center of Bordeaux: 1 km

Ask a question
Member Since 2000