A family friendly historical building in a unique cultural environment 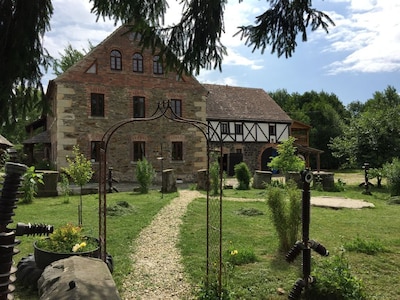 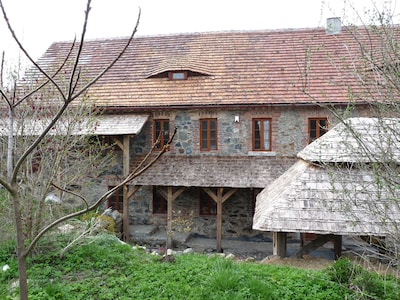 4 bedroom, 3 bathroom house in quiet rural location on the border of 3 countries

Witek - Originally from Warsaw Witek was an engineering and construction site manager by profession. Since retirement he has been travelling with Sara making the most of every opportunity to learn new skills and put them into practice. From Tai Chi in China to ceramics in Malaysia, building his own kiln in India and turning his hand to woodworking, weaving and tapestry Witek is now an accomplished craftsman. He has also been occupied with managing the restoration of their traditional farmhouse in Włosień and The Mill House, researching local history and traditional techniques and materials in the process. Visitors will have the chance to see his work and to share what he has learned. Sara - Sara is from Reading in the UK. She has recently retired from her job as an engineering and construction project control manager. Her work took her around the world to the Shetland Islands, Scandinavia, Egypt, Thailand, Malaysia, China, India and Romania not forgetting Poland, where she met Witek and which is the place she has chosen to call home. Sara is also an accomplished craftswoman with a special interest in textiles, traditional costumes and human figures. She has an extensive collection of arts and crafts from her travels. She has researched and created her own collection of costume figures ranging from tiny dolls to life size mannequins which will be on display to visitors. Sara has also been responsible for much of the internal decoration of their farmhouse home and The Mill House, Włosień.Both from engineering backgrounds, one of us from Poland and one from the UK, we have been working, learning and exploring the world together for eighteen years. After many adventures in Europe, Africa and Asia, we chose to settle permanently in the lovely land of Lower Silesia in Poland, in the former Lausitz, at the border triangle of Germany, Poland and the Czech Republic. Inspired by our experiences and the people we met we have brought back many ideas and handicrafts.

The Mill House Włosień was built as a watermill in 1827 in Upper Lusitania under German administration in the village of Nieder Heidersdorf or Heydenreichsdorf in the district of Lauban. After the Second World War this district, now known as Luban, became part of Poland, and the village was re-named Włosień. The building became a private home and the mill fell into disrepair. Since we moved to a farmhouse nearby we had fallen in love with the mill. When the occupants decided to move to the town we leapt at the opportunity to fulfil our dream of renovating it as a guest house and to share the beautiful building with as many people as we could. The renovation brought many surprises. It turned out that under the old grey plaster was a fabulously colourful stone building constructed in sandstone, basalt and slate. We have used local reclaimed and traditional materials to preserve the original appearance of the building. As well as modern conveniences traditional features include a ceramic solid fuel oven in the kitchen and restored ceramic tiled stove in the living room. Lower Silesia was the place where we met and both fell in love with twenty years ago and now we have finally realised our dream.

Wlosien Mill is in a quiet location with lovely views from every window. The building is 200 years old with beautiful slate, sandstone and basalt walls and internal wooden beams.