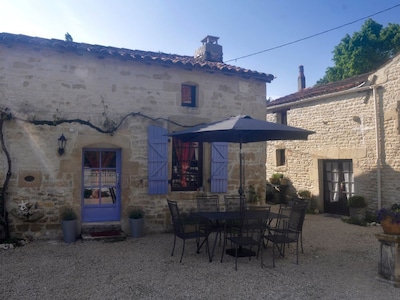 king
This room can be either a double room or twin room.

Bedroom 2 can either be set up with twin beds or a double bed, please advise your preference

Hosted by Tania and John Clegg

About Tania and John Clegg

Hailing from Warwickshire and Worcestershire, having seen the children safely grow up and build successful careers of their own, it was time for John and Tania to "pull the plug" and move, lock, stock and barrel, to France in order to realise a long held dream. In their previous lives, John was a director of an import/distribution company, working with Chinese and Vietnamese factories supplying national retailers with consumer durables (there are only so many long haul flights one person can take in a lifetime); Tania was a receptionist at a busy dental practice in Stratford upon Avon. Now based permanently on site, they have made Chez Fins Bois their home and are loving the slower pace of life. Eventually there will be five fully renovated properties in this rural setting but, for 2016 at least, they will have three up and running, of which Les Hirondelles was the first to open in early April.

Tania and John Clegg purchased this Cottage in 2015

The second sunniest region in France, Charente Maritime is a beautiful place in which to spend a relaxing holiday. Long clear straight Roman roads make driving a pleasure once again. Secluded villages selling local produce with small bars and bistros to explore. The rolling countryside is a patchwork quilt of vineyards (grapes mainly destined to become Pineau or Cognac) interspersed with cornfields and sunflowers. The long, unspoilt Atlantic beaches are not far away and within an hour's drive. La Rochelle is a beautiful historic port , the Aquarium is a superb attraction. St Martin Ile de Ré is stunning, reminiscent of Padstow, the bars and restaurants surrounding the marina are ideal for a relaxing lunchtime drink or an afternoon drink. This is a historic region with palaeolithic settlements standing side by side with the Gallo Roman forts, arches and amphitheatres. Cognac, Angoulême, Saint Jean d'Angely, Niort, Saintes are larger picturesque medieval towns all within easy reach. The Church of Saint-Pierre d'Aulnay (French: Église Saint-Pierre d'Aulnay) is an important Medieval church on the pilgrim's way to Saint-Jacques de Compostelle. The Church is thought to have been built in 1120-1140. However, why not just enjoy the gardens, pool, al-fresco dining and games and just relax in this peaceful setting