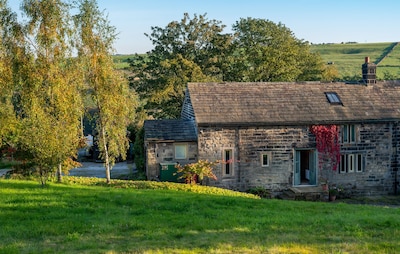 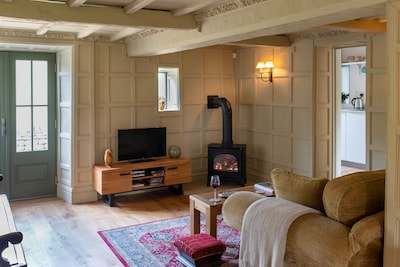 Carolyn & Brian have worked as freelance journalists for over 30 years, specialising in interior and garden features for national and international magazines, like Homes & Gardens and Country Living. Their work has taken them around the world and they have enjoyed meeting people of all nationalities.

Hebden Bridge is a unique little town nestling in the hills between Leeds and Manchester. It has a rich industrial heritage, which can be seen from the myriad hillls dotted around the steep-sided valleys. Whilst once these 19th century buildings were busy producing textiles, today they are more likely to house arty cafes and independent retailers selling all manner of interesting things. Over the years we have lived here, Hebden has become known for its quirky independent shops and galleries, which often sell arts, crafts and food products that are made in the valley. From jewellers and potters to bread makers and micro brewers, there is a real wealth of creativity to be discovered. In 2016 this originality was rewarded when Hebden deservedly won Small Market Town in the Great British High Street awards. You will find something going on in the town most weeks - piano festival, folk festival, open-studios during the arts festival, burlesque show, vintage car rally, handmade parade with giant puppets. Every week in Lees Yard off St. George's square in the centre of town, there are markets, selling local food and produce, second hand goods, arts, crafts and artisan products and in 2016 they won Britain's Best Small Open Market. Cafe culture is alive and well in Hebden with over a dozen to choose from and there is a lively pub scene with some offering delicious pub grub and others live comedy or music acts. Eateries on offer span 12 different countries - so you could almost eat your way around the world! Cuisines range from Thai, Tibetan and Turkish to Janpanese and Italian. Other good things to do in Hebden include visiting our volunteer-run cinema on Burnley Road in the centre of town with its comfy armchair-style seating or take a stroll along the canal bank and admire the many colourful narrow boats moored alongside. There is always something different happening in Hebden, which is why we never tire of the area or the people.

The oldest part of Sutcliffe House dates from around 1650. Built in the longhouse style common in the Pennines, the farmhouse became a restaurant in the 1950s. The owners at the time knocked through to the attached barn in 1946 – according to the date stone above the door – to extend the accommodation. Walkers on the Pennine or Calder Ways – which both cut through our 5 acre plot of land – were invited to stop for chicken and chips or other home-grown farm produce. The Sutcliffe brothers who owned the place back then had a passion for collecting antique Jacobean furniture and the story goes that all the public rooms were filled with impressive pieces of heavy oak, plus some very important artwork (including a Joshua Reynolds painting which is now in the Manchester Art Gallery) Over the years, the restaurant became more refined and let out some of its rooms for bed and breakfast. In 1988, after falling in love with the property over Sunday lunch, we bought it and turned it back into a private house. We landscaped the grounds, built lots of dry-stone walls and planted well over 1,000 trees. Three years ago, after semi-retiring, we decided we wanted to share our location with people who love to explore the countryside and set about turning our barn into a one-bedroom holiday let – ironically separating it once again from the main house. It now has its own front and back doors and is totally independent from the main building. We feel Sutcliffe House is a very special property and the Barn shares all the interesting period architectural features and therefore all the character. Its location never ceases to delight us, as there are so many wonderful walks in the immediate area and further afield. The wildlife we see on a daily basis, both on our land or in the surrounding countryside is a joy and Hebden Bridge has so much to offer. As a holiday destination, we hope you will love everything as much as we do!