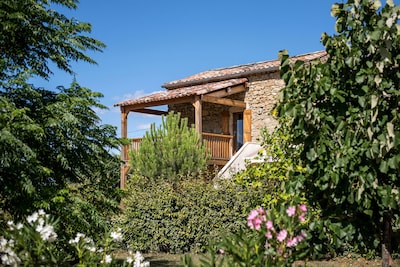 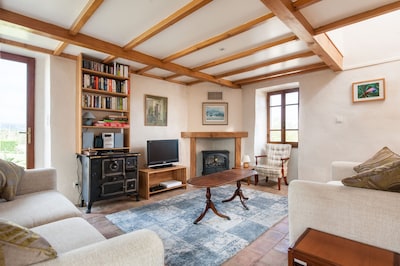 La Magnanerie - Fantastic views, perfect base for the Ardeche and Chazzezac

Light And Airy Living Area With 2 Bedrooms And Bathroom Sleeps 4.

Bedroom 1 has a double bed, pillows and duvet (bed linen is included and the bed is made up for you before your arrival), bedside tables, lamps, chest of drawers and hanging space Bedroom 2 has two single beds with pillows and duvets as above with two chests of drawers. Please note that the upper floor has restricted headroom. A cot for a baby or child up to 3 years old is available subject to availability and notice for a small fee.

My husband worked as an architect in Cumbria for twenty seven years but always wanted to do something more physical in the sunshine. We had already bought La Petite Grange which we imagined we would retire into. In 2009 Alan had the chance to do something different, so he moved to the Ardèche with a view to building and converting properties which we would run as gites. He lived in La Petite Grange whilst he restored it and we then bought the other part of the building, La Magnanerie, from our neighbour so that we could let out La Petite Grange and live in La Magnanerie whilst we built our new home. Alan spent the next year converting La Magnanerie and we lived there very happily for two years before moving into our new house in the summer of 2013. Alan's next project is a further barn conversion on the other side of the village so he certainly has his work cut out for him!

It is light and airy with fantastic views in all directions and just a wonderful place to live.

When we first walked into La Magnanerie we could see a beautiful space with shafts of light coming through the (then rotten) shutters. Opening them up was a magical moment as the space was so light and airy, with wonderful views. An old stove was rusted up against a wall. The owner told us how his family had been evacuated to La Magnanerie during the war and the stove was his mother's only source for cooking and heating water. He kindly gave us the stove which we have since cleaned up and is in the living area. We have since converted La Magnanerie and lived there for two years. The first floor has a feeling of light, openness and space and the terrace provides a large outside space with lovely views (and particularly lovely sunsets). Upstairs is more cosy with limited headroom.