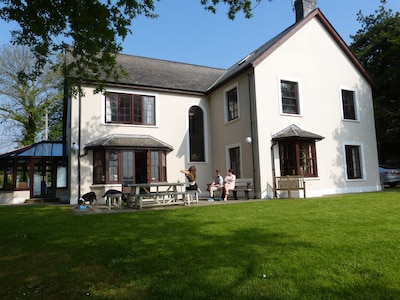 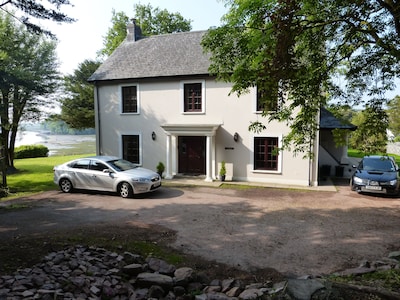 I was born in London, educated at Grammar School in Slough and Birmingham University, and have spent almost 50 year working in the computer software industry. I started the company Symology Ltd (www.symology.co.uk) in 1983, which over 30 years of successful operation has grown to employ nearly 100 professional staff. In 2014, I transferred the company into employee ownership, so that it would retain its existing culture and continue to look after both its staff and customers. I have been married for nearly 50 years, and my wife and daughter (photographed in the Laugharne area with two grand-children) co-own the property. Although over retiring age, I am still working almost full time, and over the next few years whilst we, our daughter and grand-children only visit Laugharne occasionally, we are letting the property for periods when we do not need it ourselves.

We first came to Laugharne over thirty years ago and, like many visitors, were captivated by its beauty and unique atmosphere - old-world charm coupled with a culture of friendliness and fun. We returned again and again, before eventually buying this house in 2014. Having completely re-furbished the house, modernising the kitchen and shower rooms, re-fitting the bedrooms, but retaining the traditional splendour of the living accommodation, we are now sharing it with visitors for the first time.

Laugharne itself has a unique friendly atmosphere and is both natural and unspoiled. The town itself has a population of only around 1,500, but unusually has its own independent "Laugharne Corporation" (one of only two in the UK) as a result of a Royal charter dating back to 1270. Although small, the town has some amazingly good facilities, and is so well known that it regularly attracts stars of television and screen for its festival days. It has a hotel and a restaurant, both of which have been voted in the Top 10 by a national Sunday newspaper. The famous Browns Hotel has been visited by many well-konwn people. Apart from Dylan Thomas, the poet who lived in Laugharne, Browns Hotel has hosted people as famous as President Carter, Richard Burton & ElizabethTaylor, Peter O’Toole, Charles and Camilla, Mick Jagger, Pierce Brosnan, Alexi Sayle and Cerys Matthews. The house itself boasts what is probably the best views in Laugharne, and has the seclusion of a large private garden, whilst only being a few hundred metres from all the facilities and places of interest offered by Laugharne. It is also only 10 minutes drive from the beautiful, safe sands of Pendine, with its own history of holding the world land speed record in 1928 on the 7 mile long beach.