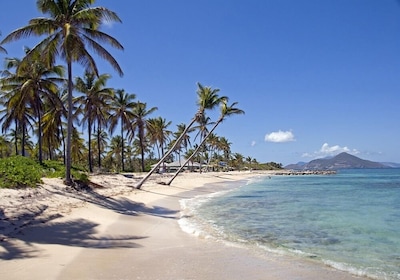 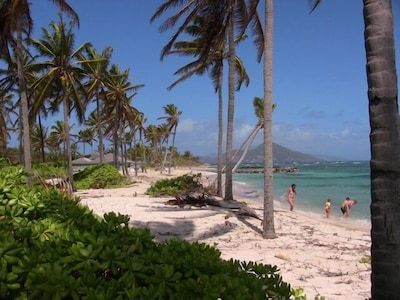 Twin beds can be converted to king size bed. Both bedrooms are located at opposite ends of Coral Reef Villa for privacy and both bedrooms have full bathrooms and fabulous ocean views. Top quality comfortable mattresses, Also studio apartment with screened porch, at the beach, available with kitchenette ( stove and oven, frig, microwave, sink etc. ) and bathroom ( shower, toilet, sink ). One or two guests can stay here as a third bedroom or before or after renting Coral Reef Villa. This is a way to get better airfares or frequent flyer seats.The cost is first and second nights are each US200. Any other nights are US 120. more per night in high season / low season each extra night is US80. Lounge chairs, beach chairs and hammock are available. Wi-Fi , cable TV, local phone and gas barbeque grill as well.

I am a retired French teacher who was born and spent most of my childhood years in Montreal, Canada except for 5 years in Orange Park, Florida where my father was a psychologist at the Yerkes chimpanzee lab and a year on scholarship at a university in Neuchatel, Switzerland. When I returned to Montreal I met my husband (on a blind date ) at McGill University where I was an undergrad student and my husband was a medical student. When we graduated he returned to Penna, his home state, for his internship. After that his residency training took us to Texas, Maryland, London, England and Wisconsin. During this time we had two sons and later adopted a daughter and took in foster daughters whom we wanted to adopt but the mothers just wanted to hold on to them loosely. We also took in exchange students and a family from Vietnam for 6 months. In 1989 my husband’s friend, from undergrad years at Gettysburg College, purchased Nisbet Plantation on Nevis and we started buying land next door. We ended up with 4 acres on the ocean and now that we are retired we live in our own villa and rent CORAL REEF VILLA. I feel so blessed.

JANE PAUL purchased this Villa in 2000