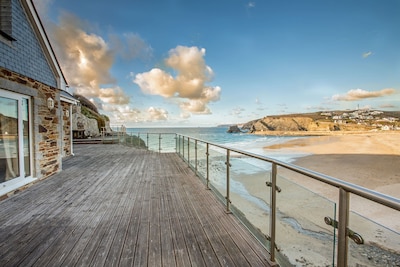 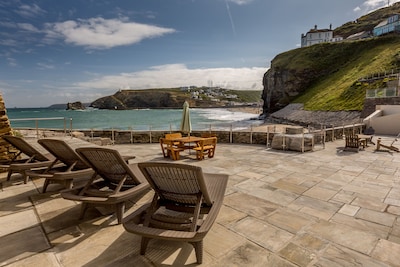 Dr Alan Dean purchased the original cottage in 1974 and applied to fully rebuild and extend the property and derelict chalets in 1999. Follwing a long planning permission application process, the house started in 2001 and took several years to complete. Downsizing now that the family have moved away, the decision has been taken to let other families enjoy this fabulous property, split into two houses for their fantastic family holiday breaks. The original Smuggler's Cottage was built in 1449.  In 1960 it became a hotel with 9 rooms. During the last war General De Gaulle was billeted in the hotel. In the 1940's The Rake's Progress, starring Rex Harrison and Lily Palmer, was filmed in the house . It was totally rebuilt between 2001-2003 by the Dean family as a private residence and they have lived there ever since, until deciding in 2016 to downsize and turn the property into luxury holiday cottages. ​ It now stands as 2 separate houses - one on the beachside and one on the clifftop hence their separate names. ​

We think it would be very difficult to find a more uniquely located property on the north Cornish coastline, especially with such close proximity to the beach. Smuggler's Cove Cottages are ideally situated on the North Cornish coast and offers everything you could need for a quintessential beach holiday with a touch of luxury. Accessible by road, rail and air the location makes a great base to relax and enjoy the beach whilst being within easy reach of a wealth of fabulous days out whether you are looking to enjoy a family holiday, romantic break or a getaway with friends.

Clifftop offers uninterrupted, flawless views of the coastline from its expansive and well-equipped balcony - ideal for a relaxing cream tea or a family BBQ. Should you get tired of the beach (!), the property also sits on the South West Coastal Path affording access to walks taking in the rugged countryside which has inspired many artists and writers over the years. Run by a local family, we are well placed to offer advice and assistance to make your stay truly special, whatever the reason for your visit.