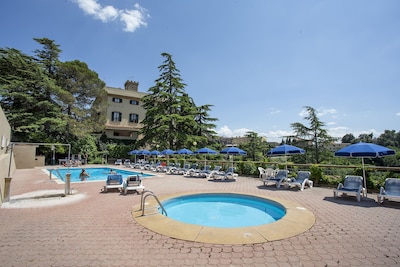 Apartments in antique villa with pool, at Guardistallo ,near the sea. - App. Bilocale (Typ A)

Virgilio Marchionneschi decided to built a house suitable for the changed needs of his family and farming enterprise. With this in mind, on the 22.02.1878 he purchased the old cemetery land next to the church and rectory. He immediately started building a beautiful mansion to use as a home, with every comfort for his family and guests. In the basement there were ample rooms for the needs of the farm: the olive press, a big cellar, grain stores and several store-rooms for the preparation and storage of the various products, which came from the numerous farms belonging to the property. He also set up a precious archive of documents, books and religious objects in a small chapel consecrated to Cardinal Pacelli, future pope. The mansion was called “Villa Elena”, probably in honour of Queen Elena of Savoia. Virgilio lived there with his wife and they were blessed with the birth of three children: Giulio, Fabio and Elena. When he died, in 1920, his son Fabio inherited the villa, while Giulio inherited a similar villa situated in the Commune of Montescudaio. On the death of Fabio Marchionneschi in 1938, following various successions “Villa Elena” passed to Elena Marchionneschi. Her son, Piero Sforzini transformed the villa into a tourist structure in 1961 and nowadays the Hotel-Residence “Villa Elena” is patronized by a range of international clientele.