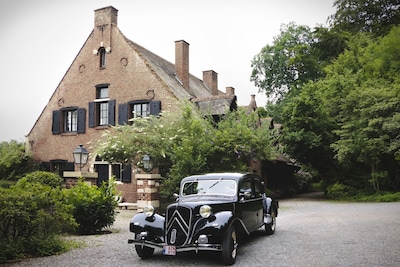 At the end of the 1930s, Henri de Steenhault commissioned de Waerbeck to build a country house in Vollezele, on the edge of a beech forest. In the old Ferraris atlas (1777), the area is registered under the name Ellenbosch. In 1973, the estate came into the possession of Bavo Cool and Virginia Smeets. In 2003, the manor was entrusted to Alexandra Cool, one of her three daughters. Together with the Passa Porta Literature House, she transformed the villa into a valuable residence for foreign writers. Between 2004 and 2015, more than two hundred writers stayed here, including Jonathan Coe, Olga Tokarczuk, Ludmilla Uelitskaya and Tommy Wieringa. Alexandra Cool has gradually expanded this operation and opened the villa to writing courses, theater companies, academics, researchers and others. Translated with www.DeepL.com/Translator (free version)