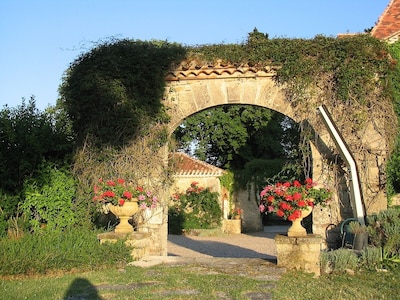 Joanna and Bill Stuart-Bruges bought their first property in France in 1973, when they originally fell in love with the amazing Lot/Dordogne/Aquitaine region. At that time Bill's job had taken them, just married, to Bordeaux. They already had little Lilac Cottage in Devon. Now based in Hampshire, they now spend half their time in France, where Joanna has built up a team of excellent local craftsmen and housekeepers to restore and help look after 3 châteaux, as well as the original little farmhouse Lafage. The family includes several musicians and there are now 5 grand pianos and one upright, distributed amongst the properties!

We knew this region already, having owned a small farmhouse there since 1973. It is the most beautiful, unspoilt and friendliest part of France! The Lot and the Dordogne are full of mediaeval chateaux, villages, towns and bastides. The rivers themselves are perfect for gentle canoeing, the wine and the food delicious.