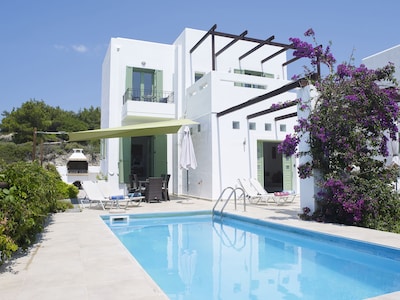 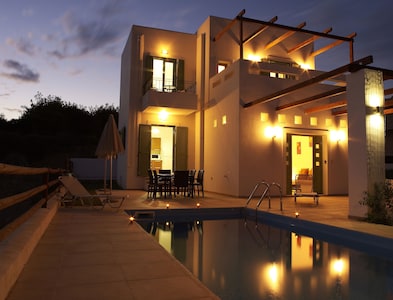 We live and work in Dorset and started holidaying in Rhodes in 2002 and like many visitors we fell in love with the beauty of the island, the history and the hospitality of Rhodians. In 2007 we decided to look at buying a holiday home and potential retirement property.

There was never any question that Rhodes was where we wanted to buy and having got to know the Island well and looking at properties in various locations we decided that the traditional village of Gennadi, away from the busy tourist areas yet has everything you could want within walking distance, was the ideal setting. It was in late 2008, after much searching, we looked at the concrete shells that were to become the Gennadi Hills properties. Our minds were made up when we saw the fantastic views over the sea, the equally beautiful mountains along the coast above Pefkos and the wonderful landscape towards the southern tip of the island. The design is in keeping with the traditional look of the village yet with a modern feel.

The villa was completed in June 2009 and we spent a busy few weeks furnishing and equipping it to ensure our guests had everything they needed for a relaxing holiday. The villa is named after Derek’s late father, as fittingly Alexander is a prominent name in Greek history. We have enjoyed holidays with our parents, children and grandchildren at the villa. We love our time in Gennadi and enjoy nothing more than being able to sit outside until late at night in the peaceful surroundings and then waking up to the glorious views in the morning. Due to work commitments we can only visit a few times a year at present, however it gives us a great deal of pleasure when people have enjoyed their holidays at Villa Alexander and say that they have had a peaceful, relaxing, and fulfilling time.