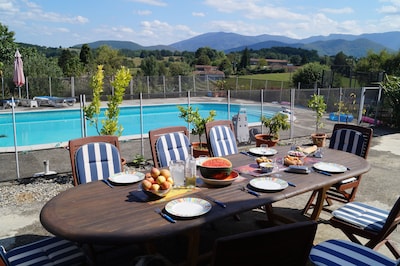 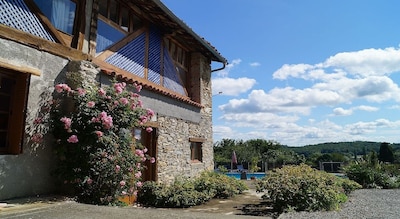 Comfortable and spacious with fabulous views over the Pyrenees - relax!

Hosted by Alison and Mike Homer

About Alison and Mike Homer

Mike is a former teacher and Alison is a Chartered Accountant working for Airbus in Toulouse. They ave two daughters: Lucy is at University and Lily attends a local school. Both are bilingual.

Alison and Mike Homer purchased this Barn in 2005

We decided to move to France in 2005 whilst the girls were still young enough to learn the language. Alison formerly worked for Rolls-Royce and it seemed logical to move near to the aerospace centre of Toulouse. Two years research and many visits later brought us to Rouede. Within an hour of Toulouse and yet close to the mountains. Alison fell in love with the house as soon as she saw it, although it was covered in snow at the time and we had no idea what the views were like until we revisited in the Summer to make an offer. We have found the people in the village very welcoming and we have developed friendships over here. Mike enjoys walking in the hills and mountains and Alison is a member of a local choir.

The House is located in a very quiet and friendly village. The views and local walks sold the property to us. The weather is warm from April through to the end of October with a "hot bit" in the middle. September is a particularly lovely month to be sat out in the garden or in the pool. We usually can swim from April to the end of October. Winter doesn't really show itself until January and February, the winter season seems short here and we rarely get large falls of snow.