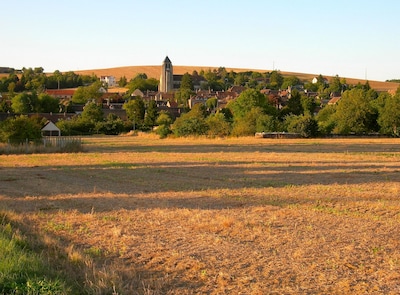 We are the Gardner family, from Epsom, Surrey in England. Our family has owned the property since 1988 when it became our parents cherished home. It is now our shared family holiday home. With personal items, functional and decorative, including many books (reference and fiction) we want the house to be comfortable and welcoming, like a proper home. The house offers what we look for ourselves when we are renting holiday accommodation - a place of comfort, character and something rather out of the ordinary. We are based in England but we visit Voisines as often as we can. In our absence we are lucky to have a local housekeeper / caretaker who lives nearby and tends to the house and garden as if it was her own home.

Paul Gardner purchased this House in 1989

Our parents found the house by chance and fell in love with it. Driving through the Yonne to the South of France for a holiday, their car broke down in a picturesque old village nestled on the lower slope of a hill, surrounded by fields of sunflowers. They found they were in a place called Voisines. The car had stopped outside the last house in the village street. On the gates was an 'A Vendre' sign (For Sale). They peered in and saw a large courtyard with an old farmhouse and ancient wood-framed barn. Wishfully joking that it was just the kind of place they wanted to retire to they noted the phone-number of the owner. Once in the South of France and returning home all they could think of was beautiful Voisines and the house and garden they had seen... A year later it was theirs!

Though just 10 minutes from tree-lined avenues & the provincial grandeur of Sens, itself only 1 hour from Paris by train, Voisines is a world apart from the crowds and rush of urban life. With its landmark church & quiet lanes of courtyarded houses & barns, mostly hundreds of years old, including our house, Voisines seems a haven of peace, charm and character. Our shared pleasure is to spend time in the tranquillity and privacy of our courtyard garden or to pass under the fig tree, up through the door to the orchard garden for the far views, or to catch the sunset. In Winter -the log fire, a good book, delicious local food & wine.