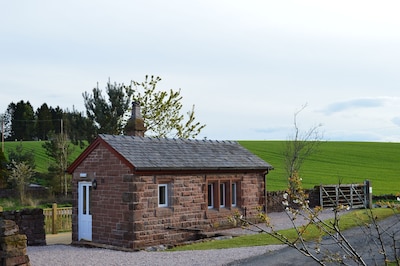 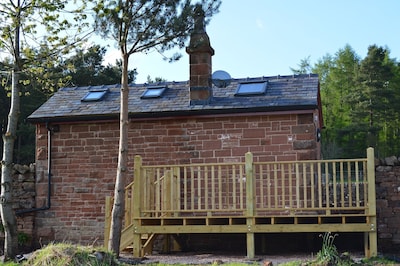 We moved into the property on 1st October 2004, leaving city life behind, in search of a more peaceful and fulfilling life, for both ourselves and our two children, Elliott and Jasmine. Gavin, born in Northern Ireland, left Limavady in 1987 to study at Bradford University. There he qualified as a Pharmacist in 1991 and is the Pharmacy Manager at Sainsbury's Penrith. Wendy, born in Tyldesley, Manchester left in 1989 to study at Bradford University. There she qualified as a Pharmacist in 1994 and is now the Pharmacy Manager at Green Tree Pharmacy, Kirkby Stephen. Whilst working in Leeds, we met in 1992 and married 25th August 1996. In July 1999 Elliott was born and in February 2002 Jasmine was born. It was at this point we decided to leave the city life behind and moved to Cliburn.

Wendy and I fell in love with both the location and character of the building when we first saw it. We loved it so much we live in the Station House beside the Weigh Office and decided to renovate it, so others could enjoy it as much as us. We have just finished the renovations in May 2015.

We live beside the Weigh Office all year round and often forget just how lucky we are to live here. To us peace, tranquility and seclusion are the norm. We step outside our back door into beautiful countryside and a 50m walk has us strolling in Whinfell Forest, where we regularly see the local red squirrels, roe deer, owls, buzzards, pheasants, great crested newts and an abundance of other wildlife. At night little light pollution means that we can stargaze and if that wasn't enough, a short drive and we are walking up one of the many fells or playing in one of the lakes. What more could you ask for?