Glenelg, pet friendly spacious house with fantastic views across the bay to Skye 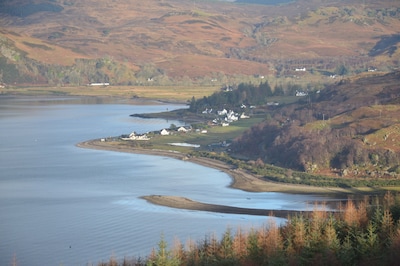 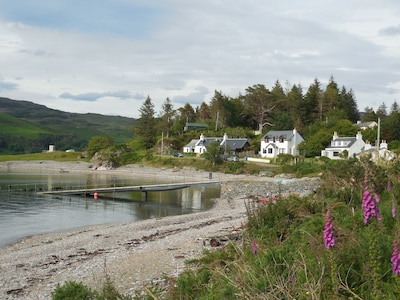 I am originally from Glenelg and was very lucky to grow up in this special place. Due to work commitments I have spent the last 35 years working & living at various times in five different European countries. I love to come back to Glenelg whenever I can and am always sad to leave.

Myra Macleod-Nolan purchased this House in 1999

Tigh-na-Camus was originally the local police house and I remember as a child being taught how to play badminton by the police officer who lived in it. Since my husband and I bought the house we have over the years sympathetically changed a lot in the house. The biggest alteration was when we added the modern extension to the rear of the property, though still managing to maintain the traditional croft house look at the front.

Tigh-na-Camus has a very special feel to it, tranquil is how many describe it, which is probably due to its age (it was built in approximately 1897) and its character coupled with the modern comforts & facilities of the large bright family kitchen and bathroom. The sun room is also a treat to sit in, be it when the weather is cool or super hot, the ever changing vista in front of you will work its magic. It is a view that you will never tire of or forget and probably like me, wish that you could take it with you when you leave.