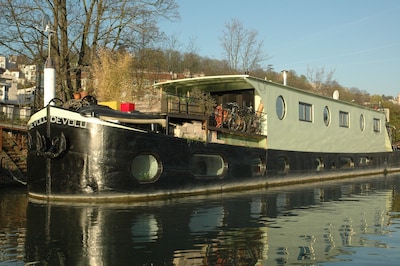 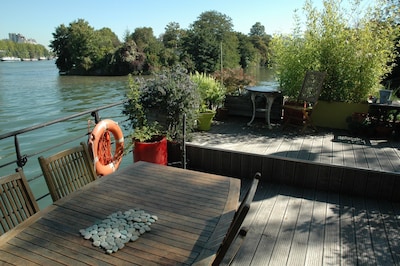 I work from home most of the time, so it's really important to me to be in a pleasant and tranquil environment. About 25 years ago, I discovered the ideal way of achieving this while still having all the advantages of being in the big city is to live on the river. Having made the move to living on a boat, I've never once wanted to go back to living on the land.

Devolu offers us the chance to live somewhere that combines all the pleasures of being in Paris with an extraordinary quality of life. Don't be misguided by the fact that the map shows us as being 'outside' Paris - most people don't realise that Paris, unlike other capital cities, has officially not changed size or shape for a couple of hundred years now and the city's borders have stayed exactly the same as in the 19th century! Meudon, where the boat is moored, is an area about one kilometre outside that 19th century city border, so in most capitals it would be considered pretty central - in London, for instance, we'd be talking about the distance from Notting Hill to Piccadilly Circus. We go everywhere around the city by bicycle and leaving from here I count 20 minutes to be at the Eiffel Tower in 20 minutes - having done the whole journey on bicycle lanes along the riverbank, which is pretty nice! Meudon is an area that has always been popular with artists and well-off Parisians - the sculptor Rodin lived here, and his house can be visited up the hill from where the boat is moored. The main street up the hill from us has a very quiet, villagey feel to it and there are good transport links all around the city.

What makes this Boat unique

On Devolu, you have all the advantages of being near the centre, but in a calm and green environment. And there's really nothing that compares with being on the water - as soon as people step on board a boat they feel as if they've entered a different world, leaving the city behind. It's a feeling I still get even after spending half my life living on boats and something we hear from a lot of the people who rent Devolu over the summer is that they enjoy life on board so much that they definitely don't want to spend all their time visiting sites! In terms of questions, the first thing people ask is 'Does it move a lot?'. The answer is no - it's a very big, heavy boat, so while it rocks a little when something goes by very fast, the motion is mild and not bothersome at all. Also, we don't get disturbed by the tour boats because we're outside their zone - they're a problem for barges further into the centre because they have huge banks of spotlights to light up the riverbank, including the interior of the barges!