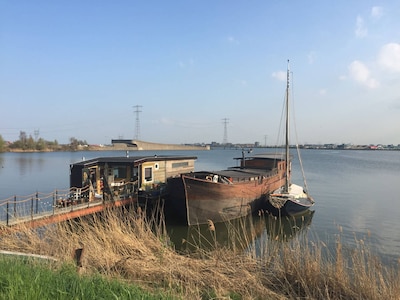 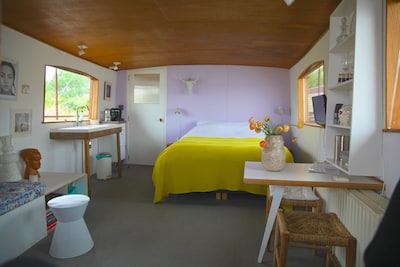 Double bed, sink (hot/cold water), coffee en tea maker (coffeecups and teabags available), refrigerator, microwave, tableware, small dinner table and sofa to relax and information about the neighborhood. Guests are allowed to heat food in our ovenWe offer use of kitchen facilities apart from a refrigerator and tea/coffeemaker. On request use of oven in our kitchen or even meal (room) service ( € 15,-- per person). Feel free to fix your own breakfast in the room!

Find out more about the Amsterdam neighbourhood of Noord (North), which encompasses both the modern northern waterfront of the IJ and the pretty rural villages to be found slightly inland.

TAKE THE FERRY TO AMSTERDAM NOORD

If you’re visiting Amsterdam, chances are that you’ll begin on the south side of the River IJ – for example, arriving at Amsterdam Central Station. To begin exploring the district of Amsterdam Noord (‘north’) simply board one of the free ferries (by public transport operator GVB) at the waterfront exit of the station (following signs to ‘Noord’). These public ferries depart every few minutes in daytime and even run (less frequently) through the night, transporting pedestrians, bicycles and mopeds.

Almost directly opposite Central Station stands the EYE Filmmuseum in all its futuristic glory. This cinema, museum, film archive and café/restaurant is a standout location; although it only opened in spring 2012, the building is already one of Amsterdam’s modern icons. Around the corner, find the Tolhuistuin, another cultural hotspot that boasts a live music venue, a restaurant and much more. The eye-catching A’DAM tower redevelopment next door is further upping the ante in this area, providing space for bars, restaurants, nightclubs and other music businesses.

In what seems like direct contrast to the cutting-edge vibe, this area also has loads of lovely little villages that are ideal for exploring on foot, by bicycle or by water. Historic villages such as Nieuwendam, Schellingwoude, Ransdorp and Zunderdorp have authentic stolpboerderijen (traditional Dutch farmhouses with roofs built in the shape of a cheese-cover), wooden houses, canal locks and impressive polder views.

WHO WE ARE WE = Liesbeth, George and our son Sam. George works as an independent cook, Liesbeth works as an interior stylist, as often as possible we are on the road with our camper together with the dog Luka. Always looking for beautiful places. Preferably a place where we can camp wildly. The west coast of Portugal is our favorite location.

Fifteen years ago we fell in love whith our old clipper (1899) called ‘the Black Swan’, the view and the ever-changing sunsets. The North of Amsterdam was until recently a ravel of Amsterdam: a raw place with a lot of industry and disorga-nized.

North is a place that is currently very popular. For us it is the perfect location: lots of nature around the corner and close to the center and everything the city has to offer.