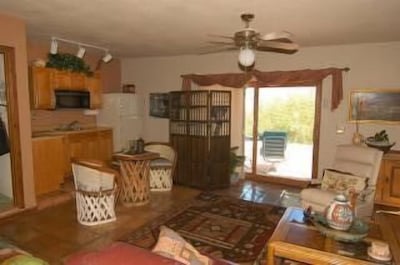 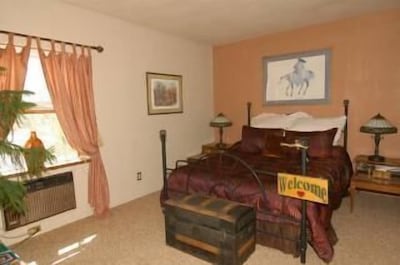 I have been working as a realtor, serving the Tucson area, for the past 16 years. Prior to that I was in the airline industry for over 35 years as a Flight Attendant, Purser, and various management positions. While flying, my travels generally took me to Europe, the middle east, the U.S., and occasionally the far east. I commuted to New York to fly international from Tucson for about 13 years. My husband (who was a pilot) and I both worked for Trans World Airlines. It was back in the glory days when flying was still fun for everyone! I was born in St Wolfgang, Austria and came to the US as a child, but still return there frequently and I'm still fluent in German (but with an Austrian accent/dialect). I have been widowed now for over nine years. It was then that I decided to open a portion of my home to guests as a vacation rental. During my own travels, my husband and I usually stayed in B&B operations or small Inns which we so enjoyed and afforded us the opportunity to get to know the local people better. This inspired me to do the same for visitors coming to the US and the southwest. I've lived in Tucson for 29 years now since coming from the San Francisco Bay area and am very familiar with the sights of the southwest, restaurants and tourist attractions, as well as our local golf courses. I'm happy to share that information. I have two adorable indoor cats which live in the main house, Sadie and Felix. And currently, I have a housemate, Colleen, who is also a widow and friend (and also a realtor). If you decide you want to stay permanently, I'm happy to sell you a house!

Sonya Dougherty purchased this Studio in 1989

Here at casa de los Leones, you have the feel of the country and the serenity it provides, but you are only approximately :10min from the freeway with easy access to downtown, the Saguaro National Park, and a variety of golf courses. There is an abundance of wildlife which inhabits my property, such as Javalina, Bobcats, Quail, Coyotes, numerous birds and an occasional deer. There are stunning mountain views as well as city lights. It feels like a nature preserve. This is why I love living here, and I think you will enjoy visiting here. I am surrounded by stately Saguaros(cactus) on my property, which grow only in the Sonoran desert. The properties here back up to the National Saguaro Park. Wade Road winds around to Picture Rocks and then over the pass into the Park which is home to the famous Desert Museum and Old Tucson (where many of the western movies were filmed). It's truly a southwest gem.

Beauty of the environment and the natural wildlife is the most unique benefit. While floating in the pool (during warm months) you are immersed in this habitat. There are nearby hiking/biking trails....and horses too, if you are so inclined. I have some horses next door as a matter of fact......but they aren't available for riding. And then there is the "hostess with the most-ess" !