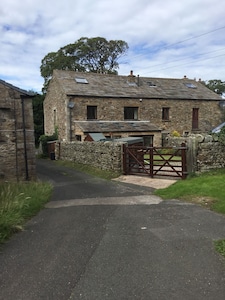 4 double dedrooms. 3 have double beds, one has two singles. The attic bedroom is accessed by a spiral staircase and has an en suite.

I am a retired company director and now work part time as a consultant. I live in The Peak District and enjoy country walks and hill climbing. As a family, we love spending time at The Old Stables, enjoying the beautiful open spaces and the wildlife.

Richard Eden-Green purchased this Cottage in 2014

The cottage is in a truly special part of England. The Mallerstang valley has been described as England’s last wilderness, yet it is less than 30 minutes from M6. The barn conversion combines modern comforts with the charm of original features in a character cottage. The cottage was converted 20 years ago and retains features such as stone walls in the livingroom and exposed beams in a number of rooms. Shops are a five minute drive away. The Lake District is 40 minutes and the Yorkshire Dales are 15 minutes away. Some of the best walks in the country are in Swaledale, which is the valley next to Mallerstang.

Uniquely the Mallerstang valley is close to the lakes and Dales, yet is within easy access of motorways. We regularly see red squirrels in the valley and often in our garden. The hamlet consists of some 12 houses, plus a historic church. One of the many walks from the house follows the river Eden and takes you past three ruined castles, including Pendragon Castle which was Lady Anne Clifford’s favourite. She was a seventeenth century aristocrat who travelled between her castles along Lady Anne’s way part of which is accessed half a mile down the road. In the summer you can catch a vintage bus outside the house to Hawes and return on foot on Lady Anne’s Way. The Settle Carlisle railway runs along the other side of the valley and can be joined at Kirkby Stephen. Steam trains Run on the line throughout the year. Appleby, with its annual horse fair is about fifteen miles away.