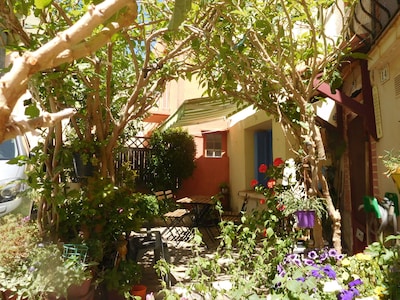 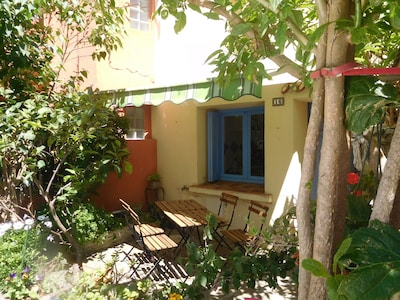 Fisherman's house above the Old Port in Port-Vendres

Very light and roomy main bedroom with view over the church and headland. Double bed (140 cm) and single bed (90 cm). Large fitted wardrobe and clothes cupboard. The mezzanine with 2 single beds and floor area 11 sq m is situated above the kitchen. Note that the ceiling slopes and the maximum height is only 1.80 m.

About Gareth and Irene Lewis

We are a British couple, living in France, in a small country town just south of Paris. We've been there for the last 38 years, having come over here to work. Before that we lived in London.

Gareth and Irene Lewis purchased this House in 2009

We had visited this area of the Côte Vermeille, squeezed between between the sea and the Pyrenees, so we knew it well. We finally chose to buy here because it's beautiful, the weather is excellent, often when it's cold or raining everywhere else in France. It has good wine and food. And Port Vendres is a real community outside its tourist activity, a working port.

The house is in a very quiet neighbourhood but in only 2 minutes you are on the waterfront. Go down before breakfast for fresh bread and croissants, and a bit later to see what the local fishermen have caught, or just a stroll along the waterfront, or the rue du Soleil to look at scenes painted by Charles Rennie Mackintosh who spent his last years at Port-Vendres. Watch the boats carrying fruit and vegetables from North Africa unloading opposite. All usual services are within a short distance, butcher and delicatessen, wine-merchant, greengrocer, chemist, bank, post office and plenty of restaurants serving fish and Catalan food. The house itself is roomy, comfortable and light, with fine views over the church and opposite headland.