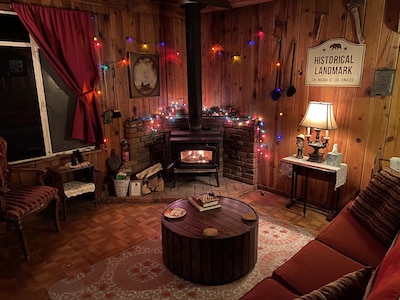 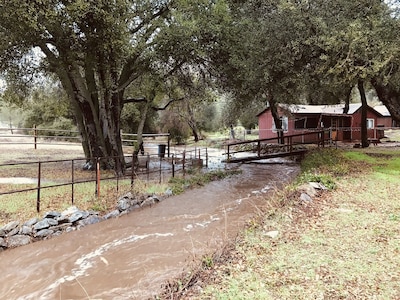 Both Los Angeles natives, Rebecca & John pulled up stakes in Los Angeles to head for the quiet life. Buying the Property in 2017 and dedicated to restoring it to its original condition, they envisioned a space where friends and family could check out from the stressors of life. Rebecca, John, their hound dog Macaroni, and five cats Pink-Nose, Manny, Button, Pirate, and Nacho reside in the main cabin on the property. The cabin built in 1890 was originally a small one bedroom stone cabin constructed by a woman who bartered with Native American Groups for stones from Mt. Laguna to build her home. Over the years the main cabin, now their bedroom, has been added on to however the structure still maintains its original character. ​

Rebecca Prine purchased this Cabin in 2017

Descanso is an area that time forgot. The city and surrounding areas are known to many as the Cuyamaca Mountains. Most of the range consists of extensive oak forest and chaparral, part of the California chaparral and woodlands ecoregion, interspersed with pine forests and lush riparian zones, featuring year round creeks and waterfalls when rain is frequent. It is rich in Native American, Mexican, and American history. We love all things old. The area is great for gem mining, gold panning, metal detecting, hiking, and discovering things unknown. It is ideal for an afternoon nap, wandering barefoot, and letting yourself relax.