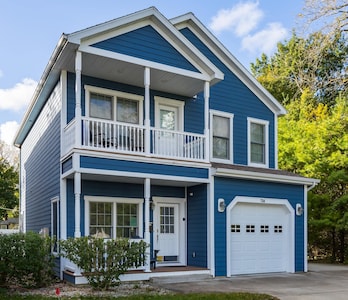 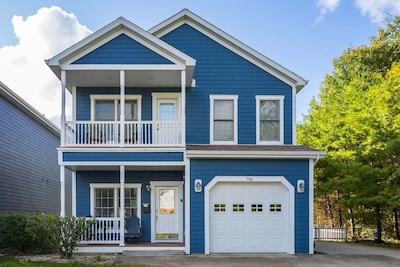 After traveling all over the world (28 countries and counting) and living in New York and Boston, once I had a family we decided to return to where I grew up: West Michigan.

We love the Great Lakes and chose South Haven because of it's location between Grand Rapids and Chicago. It's easy freeway access, and because it is very active all year. This property is great because it's so close to the beach and park for our young children. It's just far enough from downtown to avoid the busy city, unless you want to.

Many of the homes in South Haven are older homes that have been extensively remodeled. That means for many of them, that the layouts are strange, the closets are small, etc. This house was built in 2006, so everything is new, not just a facade makeover. The home is situated in a private neighborhood at the end of a dead-end street. It has a completely fenced back yard; two sides are a tall white vinyl to provide privacy from neighbors, the other sides are shorter and bordered by a small wooded area. The paved Van Buren bicycle trail is just steps from the driveway and leads South nearly 5 miles to the Van Buren state park.