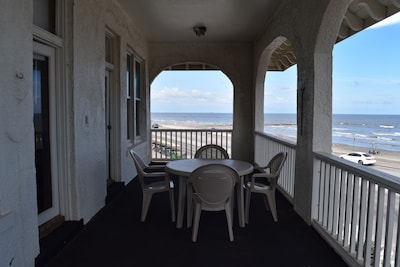 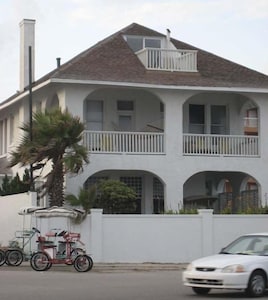 Kenneth Shelton is a 6th generation Galvestonian: the first of his family arrived in Texas while it was still part of Mexico. One or more of his family was in the city during every major hurricane since the 1850’s including the devastating 1900 storm, and many were involved in the financial, business and cultural life of the city. An uncle, David Moore did the two monumental bronzes on the Seawall near 48th street. Shelton attended Galveston schools and received a B.A. in economics from the University of Chicago. On returning to Galveston, he engaged in the Real Estate business. He is an amateur artist and did some of the paintings and drawings in the house. Many of the other Galveston artists hung in the house are friends. Shelton is an avid fencer, a sport he has enjoyed for more than 50 years. He enjoys wood work and designed the book case in the ping pong room. A love of books and of reading was shared by Shelton and his mother and grandfather. He and his wife live in a historical home that has been owned by members of his wife’s family since 1929, the move from the Seawall property being made, not without some sadness, to provide their three sons with more of a neighborhood.

The house was built in 1914 by Frederick Langbin, one of the original investors, in the Galvez Hotel. He had intended the home as a residence for his sister and her daughter. It was built of poured, reinforced concrete and was the first house so constructed in Texas. The style is similar to that of some Frank Loyd Wright structures. Unfortunately Galveston was not to the taste of Mr. Langbin’s sister who returned to England with her daughter after a short stay. The property became home to the Nedwing family. After WWII it suffered through many owners until purchased by Kenneth Shelton and his brother in the 1970’s. Kenneth purchased his brother’s interest years later, and, with his family, lived in the house, which he continues to own, until 1994. Mr. Langbin incorporated many anti-hurricane features into the home. Small lights (panes) in the multi-light windows were much stronger than normal windows and a Spanish tile roof, now gone, provided additional heft to the structure. The home went thought the 1915 hurricane with nary a scratch. Along with comfortable resort style furniture, the house is furnished with an eclectic mix of fine antiques, oriental carpets and art which accent the home’s cypress, oak, and longleaf pine woodwork, most of which was milled especially for the house. There are many unique areas from which to enjoy the Gulf, and they can be seen from almost every room. You may lease the entire property consisting of the Seawall House and two one bedroom, courtyard apartments for a total of 7 bedrooms, not including the sleeping loft, and 7 baths. The house boasts 3 – Gulf view porches and marble paved court yard. Or, you may lease only the main house or one or both apartments. (We reserve the right to require the lease of the entire property certain times of year.) We love the house and we love the city and the beach. We want others to experience this exciting and interesting city and enjoy this wonderful house.

Seawall House is located on Galveston’s Seawall at 18th Street, between The Galvez Hotel and the Holiday Inn Express and is closer to the Gulf of Mexico and beach than either hotel. On the first floor, a large veranda and covered porch overlook the ocean and provide a great place to eat, have a cocktail or to just sit and watch the waves or the parade of people. On the second floor, the two south bedrooms front on a large porch equipped with swing, hammock, chaise and chairs. On a clear nights one sees, on the horizon, ships shimmering like stars as they make their way to Houston, or from it, to all corners of the world. A deck accessed by the third floor loft looks out on the and the city and is great for sunbathing. Seawall House has four bedrooms on the second floor and one bedroom on the first floor. The third floor loft has two bunks, but it is accessed by a very steep stair, more like a ladder, and should be used only by the physically fit and sober. The back patio is also a great place to have lunch. Here, the level of activity lessens; lie in the hammock under the loggia surrounded by tropical foliage -- oleander, ginger, palms and flowering plants -- be enveloped in the usually gentle breeze and enjoy the quiet serenity. Two, one bedroom courtyard apartments sit on the north side of the patio and both have views of the Gulf. (These may be leased with the main house or separately: see below.) The main house is equipped with dominions, cards, poker chips, board games a ping-pong table and a small library of books. There, reluctantly, we provide cable and TV, but it is hoped that guests will take advantage of the unique opportunities offered by the house to get back in touch with each other, have a good read or enjoy the sea and sky and will postpone any addictions to electronics until their return to the real work-a-day world. However for digitally addicted, a high-speed Internet connection is provided.