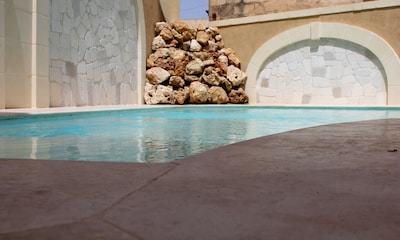 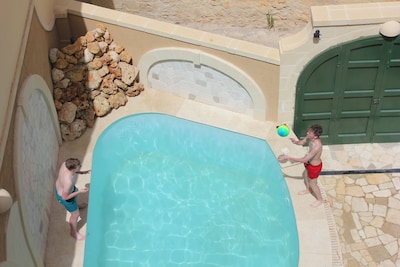 double
With En-Suite and private balcony.

We are a married couple who both come from Manchester, but now live and work in Cheshire in the UK. We have two sons, one in his late teens and one in his mid 20's.

Craig & Andrea purchased this villa in 2015

We fell in love with Gozo on our first visit to the island in 2013 and decided to return again in the following summer of 2014. We had no real intention of buying a house, but circumstances and fate led us to meet a local estate agent (Nick P). Nick listened to what we liked and what we didnt like when it comes to houses and after seeing almost every house on the island that possibly fitted the bill, we resigned ourselves to the fact that what we wanted didnt really exist. We then recieved a call from Nick asking us to meet him in Xaghra and to have an open mind...... We were led down a small cul de sac, described as an alley by the Gozitans to a dramatic shell of a building. The house had last been lived in around 40 years ago and had originally been built around 300 years ago. The original property had been divided in two and then both properties had undergone a huge transformation by building a large, but seamless and sympathetic extension onto the rear of both. Nick introduced us to the builder and owner, Charlie A, the islands master Stonemason and we then took the grand tour of the property and Charlie described the work that had been carried out and also his vision of how the house would look when finally completed. We were hooked! Hands were shaken and a price agreed for both the shell, but more importantly for Charlie to complete the work and deliver our dream home. The paperwork and finances were in place by the winter of 2014 and in early 2015 Gozo's finest craftsmen were on the job. The guys all worked like trojans and delivered to us our beautiful and unique Gozitan home.

The house really is quite a grand affair and comes with bags of history. Its last owner occupier was Nina and the house had been within her family for many generations and was at one time the home and workplace of the gentleman who brought the first Carrozin (horse drawn cabs) to the island of Gozo. (research ongoing) Nina lived in the house alone as an old lady and is remembered fondly by the locals who were children at the time. The house had no running water and Nina had to draw water from the well next to the front door (no mean feat when you look at the depth!) She also cooked on an open fire and the soot blackened stone is still in place between the huge stone arches. The house is now transformed and yet still retains many of it's orginal features. It's thick and imposing stone walls and high ceilings and arches, along with the central atrium lounge and galleried staircase give the whole property the feeling of a grand baronial hall. The garden now has a unique swimming pool. The pool is fed by the recirculating waterfall and then cascades over the lowered edge giving a wonderful, relaxing sound of flowing water. The roof terrace at the rear of the house has distant views over the channel and onwards to Malta, whilst the front terrace has distant views towards Victoria and the Citadel and also the hills of Zebugg. A wonderful place to spend a relaxing evening with family and friends.