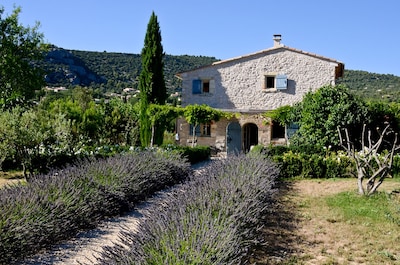 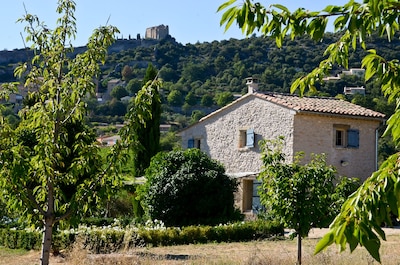 Queen size Beds (1) This is the most comfortable bed we have ever had., Sleep Sofa or Futons (1) There is a futon in the living room that easily converts to a small double bed.

We (Barney Rubin and Susan Blum) are a couple born in 1950 living in New York City (though in this picture we are Rio de Janeiro in 2004). Susan is a psychotherapist. Barney is a political scientist who has taught at Yale and Columbia and worked at the Council on Foreign Relations and the Center on International Cooperation at NYU. He has advised both the State Department and the UN on Afghanistan . We are both originally from Philadelphia. When we are not spending time in the cottage we are delighted to share LaFerrage with others.

Barney Rubin purchased this house in 2008

We first went to the Luberon in 1993, when we decided to take a 'real' month-long vacation for the first time. We then tried several other places -- Ardeche, California, Andalucia, Greece, the Haute Savoie (French Alps), but finally returned for our 25th wedding anniversary in 2000. Except for one year in Umbria, we have returned every year since, attracted by the unique combination of history, culture, food, wine, scenery, hiking, and a diverse collection of people. We started toying with the idea of buying in 2006, and finally bought the right place in 2008. It then took nearly two years (not just the one year in which Peter Mayle managed) to get this place habitable, but the results were worth waiting for.

Our cottage's farmland mainly produces cherries, cared for by a farmer belonging to one of the village's oldest families. It also produces olives, which are pressed into oil at a nearby mill. Until his 2018 retirement, the farmer's brother was a renowned caterer based in the nearby town of Isle-sur-la-Sorgue and his company is available for parties of ten or more. You can cook with the olive oil we get from the local cooperative in return for our olives, sample the cherries preserved in alcohol that grow on our property, and sample the wine grown within a few minutes of our property. The house is located on extensive sloping farmland with views in all directions. It is delightful to sit on the terrasse of ancient stone (unearthed on the property) under the hand-crafted iron tonnelle with a long view in every direction over our plantings of cherries, cypress, olive, boxwood, rose, fig, and almond and sampling local delicacies seasoned with the herbs grown in the garden under the cypress on our western terrace. In spring there are cherry blossoms, in summer lavender and white roses; in fall the vineyards turn umber, and in winter the vistas open and are perfumed with the odor of burning cherry wood, vines, and oak.