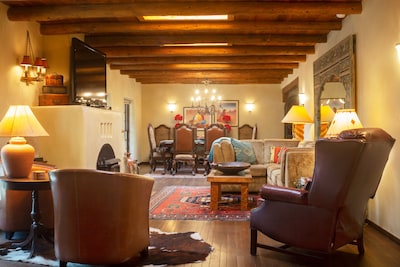 queen
This bedroom has an attached bathroom with shower

queen
this bedroom has a cozy, sunny attached room with a kiva

queen
like the other two bedrooms, it has a large closet

The master bedroom has large windows, Spanish colonial chandelier, spacious closet with shelves, and a bright bathroom with vessel sink and shower. The second bedroom has a charming sunny space attached. It has a comfy chair for reading and a heating kiva All bedrooms have large closets with shelves, chest of drawers, and luxury linens

Jessie had a career with two major corporations that included a 5-year assignment in Beijing, China as a Regional Director in Asia. She completed her career in Chicago as the CEO of a software company. Now retired Jessie wants to be near her family. She bought a log cabin in Colorado within hours of both her children's families. Recently she has renovated an adobe house in Taos, New Mexico, also in the region of the family. Jessie restored an adobe home as a work of love with careful attention to the beauty of Spanish colonial architecture Both the log cabin and the adobe casa are family homes, but when not in use, they are vacation rentals for other families to enjoy. To see the Colorado log cabin near the Rocky Mountain National Park, go to Property #243434

jessie webster purchased this house in 2012

Energized by architecture and interior design, Jessie bought a plain adobe house on a lovely street in the historic district of Taos. It took a year, but the family did more than restoration. They added architectural features, large windows, and modern conveniences with an eye for the beauty of Spanish colonial design.

When we saw this home on a shady street near the Taos Plaza, we could see the possibilities of creating an authentic southwestern colonial beauty. We loved restoring it with attention to every detail. We chose Taos because of its adobe architecture, fascinating history. mountain climate and spectacular vistas of the Sangre de Cristo mountains. I love the idea that some of the adobe structures still standing were part of the making of the Wild West. Taos is an all season resort. Our children and grandchildren can enjoy summer and winter sports here with its moderate summers, colorful wooded autumns, and ski-worthy winters near a world class ski resort. Besides that, there's always a festival, concert, farmers' market, or art show going on. With its relaxed pace and mountain air, it attracts artists as well as celebrities and is both restful and stimulating.