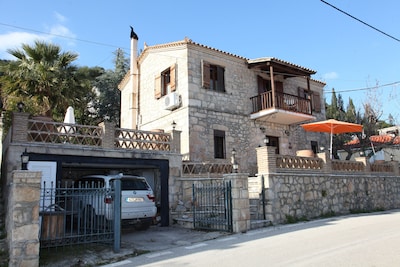 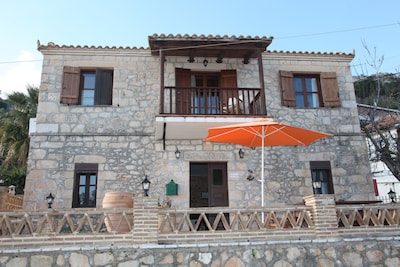 Traditional Private villa with beautiful views in a relaxing location

2 bedroom villa in two floors, sleeps 4 to 6 in a typical greek village

The Master bedroom has amazing valley and sea view. The second bedroom has garden views. Both bedrooms are air conditioned.

The Rigas family is involved with Rental Property services since 2003. Having already built a summer holiday resort (Porta del mar) in the neighbor Zante Island on 2002, they are very experienced on looking after guests and offering best quality services. In 2003, Tasos and Pavlina decided to found a villa on the ruins of the old family house that collapsed during the grand earthquake in 1953 and literally leveled Kefalonia Island. Out of honor to Pavlina’ s father who had recently passed away, and inspired from the beauty of the location, Tasos took it personally, contributed with the building and made a dream holiday house for him and his family. The following years Tasos and Pavlina gave all their heart into styling and furnishing the house according to the old Kefalonian tradition and managed to revive its glory the villa once had as a living mansion. Settled now in Zante Island, the Rigas Family is running their small hotel, and turned Villa Anelina into a self-catering Holiday Rental, which is approved and licenced under the Hellenic Ministry of Tourism. They are always on hand for any information you might need and will make sure that their representative in Kefalonia will welcome you, show you to your villa and will be always happy to support your questions.