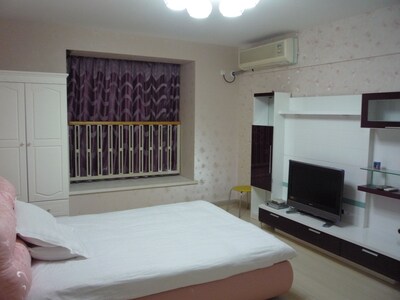 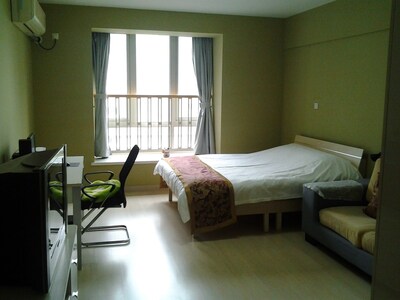 We arrived at the address listed on Expedia @ 10:30pm. Big building, 54 floors, & twice as many apartment rentals in it. The security guard had no idea where we should go. We called the phone # listed, it didn't work. We called Expedia, & after 20 minutes on the phone, they patched us through to buddy at the hotel, & I was disconnected.

We looked for a new hotel nearby, because it was late, and we were sick of this. Everything was either booked, or couldn't accept foreigners. Called Expedia back. 30 minutes on the phone, and they patched me through to the hotel guy again. My wife spoke to him (in Mandarin), and found out he had given our room (fully paid for room) away, and we had to take a taxi to the place where we would be staying instead.

This made us upset. We paid for the room here. We chose this place because it was near the hospital where we needed to go early for a medical exam, even though he paid for the taxi both ways, it messed us up, trying a non-working phone number, & given a useless address.

I asked why we weren't told of the location change, & he said, "I sent you a text yesterday." He did not, or at least not to the right number. You'd think by 11:30pm, on the check in date, for a room that was fully paid, with a text (still don't think he sent it) which was not answered, he'd try calling. He did not.

I wouldn't stay here again if it were free. Wish I had my $40, because it was a terrible experience. Oh, and no hot water in the shower.

This hotel changed my booking to a different location in their chain that morning! I could not call to ask them how to get there and was only able to figure it out with the help of a Chinese friend. The check in is in the back of an abandoned bank building up in the 21st floor of an apartment building. Very hard to find without help. Then the staff only spoke Chinese, al had to call others to translate. The room was clean and had a full kitchen but ratty towels and blankets. I wouldn't stay there for more than one night.