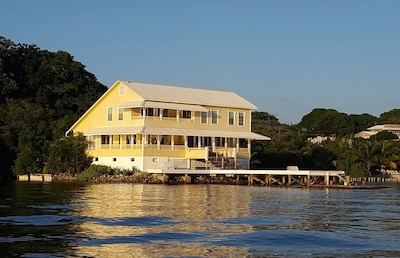 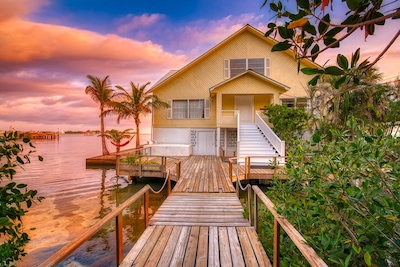 About John Arne and Amanda Løken

John Arne first came to Utila in 1997, just a few weeks into a planned backpacking trip from Guatemala to Panama. He instantly fell in love, stayed three months, and never made it further south. In 2001, John Arne was no longer able to resist Utila's siren song and bid Norway farewell. In 2006, a vacationing public radio producer from the USA named Amanda stopped to snap pictures on the drawbridge of a beautiful yellow house and met a handsome Viking on his way out to buy paint thinner. A few months later she would sell all her belongings, quit her job, and move to a tiny Caribbean island with nine boxes of books, a suitcase of clothes, and her faithful dog, Ella. Paint thinner remains highly romantic to them. Since then they have raised a family, finished reviving the lovely yellow house, built the world's largest sensory deprivation room (Float Utila) and rented out a magical, hand-crafted treehouse. Now John Arne and family are leaving the island for one year and have decided to rent out their beloved jewel of the bay to other sunset aficionados. We hope you love it as much as we do.

John Arne and Amanda Løken purchased this House in 2001

Upon his move to Utila in 2001, John Arne discovered that the island's most lovely home, the Cay House, was for sale. A carpenter by trade, he knew he was just the artisan to help the grand dame of the bay realize her full potential. Featured in tourism brochures, postcards, and Utila calendars, the Cay House has been a celebrated landmark on the island and is now, for the first time, available as a vacation rental.

Until recently, Float Utila has been a top attraction for tourists on the island. Now it is an exclusive amenity for Cay House guests, an indescribable experience of relaxation, peace, and healing. The house is completely surrounded by the Caribbean Sea, connected to the rest of Utila by a drawbridge. The best location on Utila for privacy yet walkability. We also have a swing inside the house! A swing! INSIDE! Because one of John Arne's favorite things to say is, "It's never too late to live a happy childhood." The master bedroom features a king-size hanging bed. John Arne is a skydiver and prefers to be off the ground as much as possible.