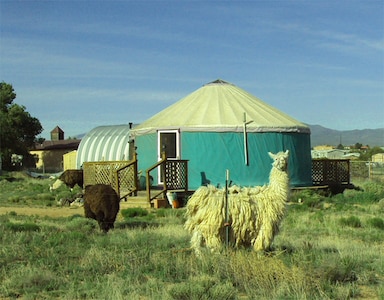 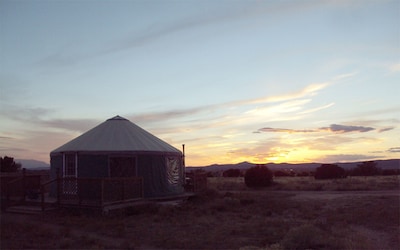 I am a former graphic artist/art director, a fine artist (painter), a roller rink owner and a llamallero (llama wrangler). I have lived in Santa Fe since 1990 and love it here. I fled the cold and snow of Michigan and moved west to Boulder Colorado with my belt buckle business. After being forced out of business by a New York distributor who copied our buckles and manufactured them in Taiwan. I took up design on the Macintosh in 1986 and was told by my fellow artists at the time that real graphics will never be done on a computer. I also took up video production and photography at this time. After about 4 years during the Reagan recession my wife Robbyn and I bought a '73 Winnebago and drove to California where I designed guest guides for some of the most beautiful coastal towns in California. The Mac plus up above the dash board, the keyboard bungied to the steering wheel and the mouse on a little platform to the right. We had great fun selling ads and meeting new people on the road for 2 years. After California we took a 4 month vacation to Santis Pac beach in Baja and painted on the beach. We than came to Santa Fe to be with my step daughter who was living with her dad there while we were on the road. While in Santa Fe I became the art director for the Santa Fe New Mexican. Shortly after that Robbyn and I became New Mexico's first karaoke hosts. After several years all that singing in smokey bars we discovered the local roller rink as a smokeless venue. The minister that ran the rink hired Robbyn to manage the rink while he was running for Congress. We bought the rink from him after he won the election in November of 1996 and have continued to run it to this day. So at the age of 45 I took up roller skating and after 19 years I have gotten pretty good at it. We named the rink Rockin' Rollers and since our first year of operation was 1997 was the 50th anniversary of the Roswell coverup we gave the rink a Rowell Alien theme.

Bill Spencer purchased this bungalow in 1999

We bought the property in 1999. I had been driving past the site from my double wide 13 miles away in La Cienega and wondered why cows were getting such a great view. a couple of years later while looking for property for sale Robbyn discovered that the property was for sale and it turned out to be the very property I had been eyeing for years. We brought our double wide to the property after buying it and put it on a foundation, built porches and stuccoed the whole thing. We then added the llamas starting with 2 girls and a boy which now has grown to a family of 11. I built barns and expanded them as the herd grew. I then built the studio and started painting again. We decided that we needed income property so I designed and built the yurt in 2008. We leased it for 7 years to various adventurous local renters. This spring we began renting it to folks for short term rental and have rented to over 50 people since June.

What makes this bungalow unique

The views of the mountains, the sunsets and the moonrises from the yurts porches and windows makes the yurt special. The beauty of the yurt itself and the company of llamas make it a totally unique experience. Our guests are invited to join us on a llama walk down to the nearby scenic Santa Fe River Walk for a small donation to the llama hay fund. If you are a guest on a Friday night you are invited to join us at Rockin' Rollers fee of charge. That offer also includes a slice of my neo-Neapolitan Marguerite cheese pizza.