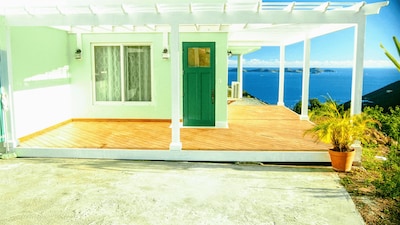 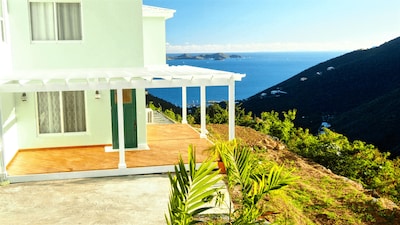 One bedroom, one bathroom with a daybed for a third person. Very comfortable.

The bedroom is large and comfortable with a clothes hanger, shelves and bedside tables. The daybed in the living room is also comfortable for an adult or child.

We have lived in the British Virgin Islands for many years (30+ and 20+). We bought the land and started building the house in 2012 and finally moved into the apartment in 2013 while the main house was being finished. After more than 4 years we moved into the main house, ready or not, so our son could get his own bedroom at last. The house was almost done in 2017 and then Hurricanes Irma and Maria hit in quick succession, which meant repairing all the damage and repainting the whole house. The apartment escaped unscathed. Good to know.

Oca Maloca purchased this Apartment in 2012

We wanted a property far enough from work but not so far as to make the commute to work tiresome. It's hard not to get a nice ocean view in Tortola but it''s harder to get land that is not on a hill. We make a rough estimate that 90% of houses are on a hill. We wanted a breeze but not incessant to make it uncomfortable to be on the porch.